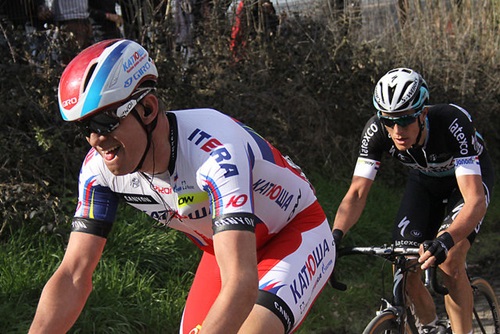 I know what you’re thinking. You’re thinking ‘did Greg Van Avermaet come second in the Tour of Flanders?’. No, he didn’t. He came third.

After the race, Avermaet said he thought he had the legs to win, but I don’t know about that. Alexander Kristoff looked like a big rumbling juggernaut that could have rolled on all day and he’s also got the speed of a sports car at the finish. I’m not really sure how you beat that kind of vehicle. Kristoff will travel all day to transport your shipment and then he will relax in the evening with a spot of drag racing. He’s an odd machine.

Not so seriously that I won’t continue to refer to him as a jetpowered truck, but seriously enough that we should all consider him ‘a big name’.

Last year Kristoff won Milan-San Remo. You can’t fluke a 300km race, but you can be Gerald Ciolek and win it, which perhaps diminishes the feat a tad. However, follow that up a year later with a second place in the same race and then win in an entirely different Monument and you’re big time.

It wasn’t even a surprise. Kristoff is fresh from racing the Three Days of De Panne in which he won all three road stages and even managed third in the time trial. De Panne might not be a top tier race, but it’s one that’s respected by the pros. David Millar is almost evangelical about it, claiming it’s the win of which he’s most proud. It’s a brutal race where no-one respects anyone and you’re forever fighting to be near the front, upright and out of the gutter. And as I said, Kristoff won all three road stages.

How did the Tour of Flanders pan out?

Niki Terpstra was the man to inadvertently settle the race. He attacked with 20-odd kilometres to go and Kristoff was the only rider who went with him. Being as Terpstra won Paris-Roubaix last year, he’s not exactly the kind of rider you ignore, so it’s safe to assume that everyone else was a bit tired. Ride 200km interspersing normal roads with cobbled walls and see how you feel. The pair got a 30-second gap and while this waxed and waned depending on what was going on behind them, it didn’t seem like anyone really had the strength to catch them.

As they neared the finish, Terpstra acknowledged Kristoff’s superior sprinting ability (the Norwegian won two flat stages in last year’s Tour de France) by ceasing to do any work. He sat behind and hoped Kristoff’s speed would be blunted by having to do all the work to get the pair to the finish ahead of the chasers. When the sprint finally came, Terpstra pulled alongside Kristoff, who reacted and at first matched his speed before positively drifting away.

The distance was no problem and he was faster than everyone else. Who can beat the jetpowered truck at next week’s Paris-Roubaix?

Zdenek Stybar had to take his false teeth out because they were rattling. “It’s difficult to say how the loss of my teeth affected my performance,” he said afterwards, adding: “It’s not the best feeling to ride without teeth.”