Gianni Meersman – I’ve heard of him 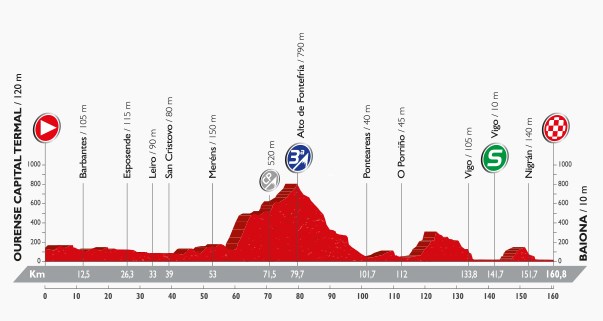 Watching the highlights of stage two, they did the usual run-through of the sprint contenders in the closing kilometres, setting the scene for the sprint to come. There were a lot of names I barely recognised and then there was Gianni Meersman. ‘Yes, Meersman,’ I thought. ‘I’ve heard of him. He’ll win.’

Sprint stages are few, but Meersman has probably already proven himself the class of the field. He could have a few more stage wins heading his way.

There’s still a whole bunch of people on the same time at the head of the general classification. Michal Kwiatkowski snatched the red jersey off team-mate Peter Kennaugh’s back by finishing slightly ahead of him.

The final climb is a short one, but absurdly steep. It’ll be a seven minute, maximum heart-rate, wheezing like a cat trying to rid itself of a hairball effort. This is very much the beauty of the Vuelta: we’re only on stage three and we’re already going to get some sense of what sort of condition the overall contenders are in. The Vuelta doesn’t dick about.

Today’s stage term is ‘isthmus’ – an accumulation of sand between the coast and a nearby island.