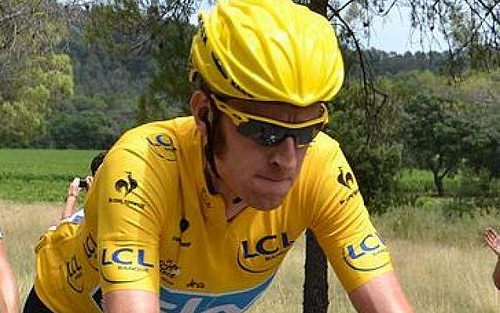 Bradley Wiggins has retired from cycling. I would have written something about it sooner, but he voiced so many contradictory plans that it wasn’t until I saw the last 25 seconds of The Jump last night that I honestly believed it had happened.

Those 25 seconds were… painful. I wouldn’t call myself a Wiggins ‘fan’ but broadly speaking I’ve always quite liked him. His sporting achievements are extraordinary and he seemed to have just enough wit about him to undercut pomposity – for example, the “we’re just going to draw the raffle tickets now” joke on the Champs Élysées.

But that outro to the celebrity ski jump show saw him repeatedly reprising his less-than-hilarious sticking-my-tongue-out joke that was first aired during the medal ceremony at the Rio Olympics. It was a bit weak the first time around, but Wiggins deployed his tongue at least three times more while gooning around behind Davina McCall.

It was almost as if he’d taken a look at his misshapen legacy with all the damage sustained by the ongoing  TUE controversy and thought ‘might as well hack a few more lumps off and then start again from scratch’.

Sporting retirements are unusually hard. They bring your mortality to the forefront of your mind – as with any other retirement – but your physical deterioration comes into particularly sharp focus. Yes, you’re deteriorating from the loftiest of peaks, but it’s also the case that your athletic capabilitity has up until now been your defining quality as a human being.

It’s a lot to come to terms with. A retiring athlete needs to reinvent themself and perhaps this is what we’re seeing with Wiggins. People have told him he’s funny, so he’s exploring this. You’d think he’d know that dry one-liners are funny and gurning is a dignity-stripping venture reserved for those with a real paucity of material, but maybe he’s devoted so much attention to riding his bike that he’s never actually worked this out before now.

Almost all elite athletes are children. They play games for a living and at the top level they’re cared for like toddlers to compound the detachment from reality. Wiggins is perhaps yet to discover his adult self.

His schtick has always been a bit, ‘look at me, I’m an outsider, I’m different, I’ve got… sideburns’ – a slightly immature caricature of rebelliousness. You rode for Team Sky, Brad. You accepted a knighthood. Sticking a Royal Air Force roundel on your sleeve because that’s what the mods did does not make you alternative.

It’s sometimes struck me that Johnny Depp is able to become different characters partly through having no actual personality of his own. I don’t think it’s quite the same thing with Wiggins. I think it’s more a lack of conviction – an insecurity about how much people will respond to his true self – that renders him so malleable.

I think he is, at heart, a smart, likeable, amusing guy. But he wants to be more. He wants to be liked by everybody. But for how long can you really manage to portray yourself as the outsider knight who mocks reality TV ahead of an appearance on a celebrity ski jumping programme?

Not long, I’d suggest. At some point you have to plot your own route.