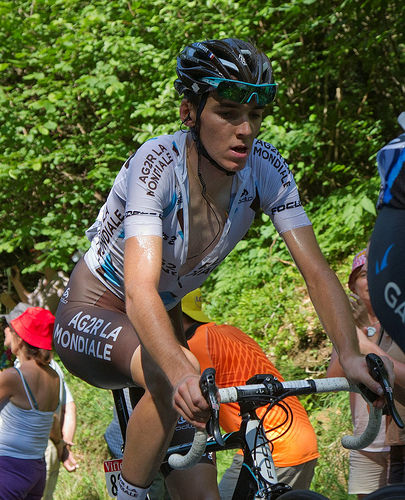 That’s if it’s possible to sneak while simultaneously winning a stage. Which it isn’t. Particularly when you’re French and there’s four shitloads of your countryfolk screaming into your face as you bear down on the line.

It was another win for the break, which contained about 30 riders early on but was down to about 10 with 50km to go. At the top of the Col du Glandon, Romain Bardet got clear with the inappropriately named Winner Anacona. On the descent, Bardet shed the Colombian, gained about 30 seconds on the small group that formed behind him and then held that over the Lacets de Montvernier to the finish. Pierre Rolland came second to deliver a French one-two.

It wasn’t all good news for France though because Bardet moving up to tenth meant that Warren Barguil moved down to 11th.

Bardet’s also now equal top of the King of the Mountains competition with Joaquim Rodriguez on 68 points. Jakob Fuglsang’s on 64, but Chris Froome’s still a very likely winner. He’s on 61 and with two summit finishes in the next two days, he could well snatch it.

Summit finishes deliver double the points of mid-stage climbs. Saturday finishes atop Alpe d’Huez, which is an hors catégorie (HC) climb, so the stage winner will get 50 points for that one alone. Makes the whole of the rest of the competition a bit farcically inconsequential if you ask me, which is why I haven’t really been covering it.

Bit dithery, leaving a slight gap towards the top of the final climb, but I wouldn’t read too much into that. I don’t get the impression that he’s as obviously superior to Nairo Quintana as he was earlier in the race, but whether the balance has actually tilted towards the Colombian yet, I don’t know. Nothing happened today and if Quintana doesn’t manage to drop Froome tomorrow, then he’s pretty much out of chances. You can only gain so much time on a single stage, even one that finishes on Alpe d’Huez.

As such, this is probably the defining stage. What happens here defines whether stage 20 will be processional or will see the whole race on the line.

Here’s the profile. There’s the HC climb of the Col de la Croix de Fer (which is basically the Col du Glandon again) before the summit finish up to La Toussuire, which is where Chris Froome attacked (and then dropped back to collect) Bradley Wiggins in 2012.