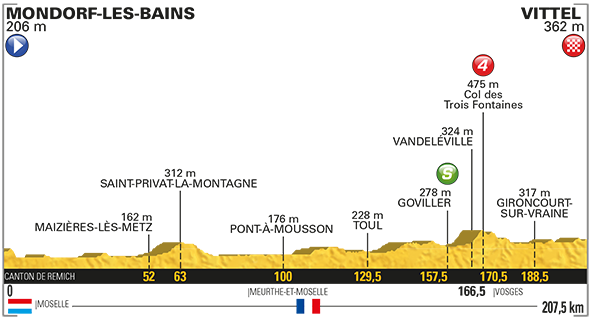 It was a day of aqueducts, châteaux and sheep. The flat profile meant the break was always going to be caught and when that break turned out to be just one rider – Belgian Guillaume Van Keirsbulck – everyone was set for a loooong day of racing.

This is what 99 per cent of the stage looked like: 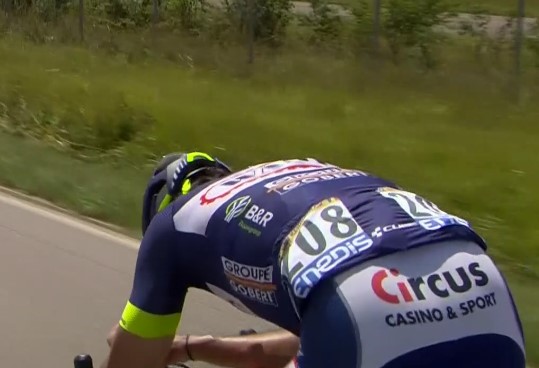 Once Van Keirsbulck was caught, a nice orderly sprint finish seemed in the offing. But then everyone fell over. 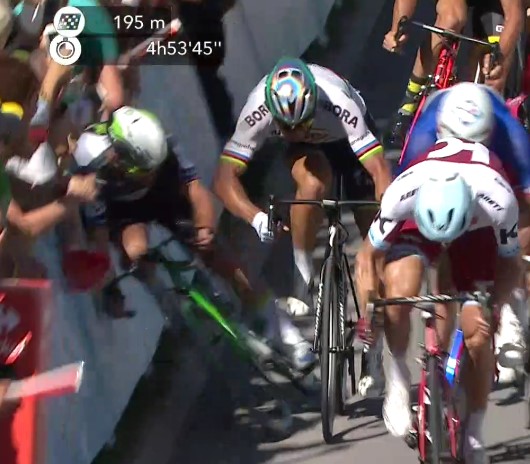 Cavenish and Sagan (via Daily Motion)

Yellow jersey Geraint Thomas was among those brought down by a late crash, but no-one was too badly hurt and the rules state that crashes in the final 3km on flat stages don’t result in time gaps.

Of more significance was Mark Cavendish getting elbowed into a barrier by the world champion and breaking his collarbone (my diagnosis – nothing official at the time of writing).

In the closing straight, Cav had slyly allowed a gap to open to team-mate Mark Renshaw. When others were forced to close it, he positioned himself behind Arnaud Démare, correctly picking the Frenchman as the one most likely to get to the line first.

Then things got messy. Peter Sagan was drifting towards the barriers and Cavendish was trying to get through a rapidly closing gap. Sagan is a solid citizen. He doesn’t give. As the collision became unavoidable, he raised his elbow – presumably for balance. All Cavendish could do was emit a panicked scream before pinging into the barrier. A couple of riders went over him immediately afterwards for good measure.

The race jury were even less forgiving than Sagan’s elbow and kicked him off the race for the incident.

Was Sagan really at fault?

It’s interesting to watch the footage from above a few times over because each time you see a new link in the chain.

Cavendish was trying to get through a gap that was closing. That gap was closing because Sagan was veering right. Sagan was veering right because he’d flinched when André Greipel had tangled with Nacer Bouhanni immediately ahead of him. Greipel had tangled with Bouhanni because he was trying to get on Alexander Kristoff’s wheel just as Bouhanni was passing him.

I’d say that as much as anything, the crash came about through an accumulation of unfortunate events, all of which were fairly normal in themselves.

Démare added a Tour stage to his Milan-San Remo win last year. Somehow Sagan came second, which would also have put him second in the points competition and overall, thanks to bonus seconds, had the organisers not applied the boot. 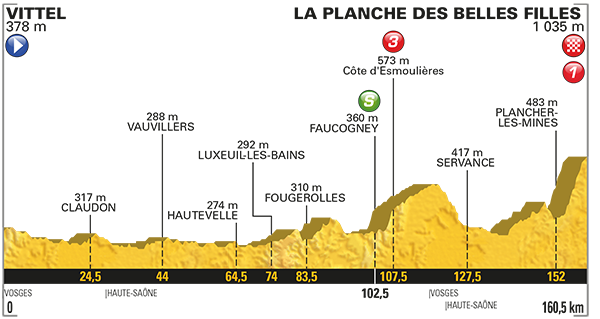 With only three summit finishes in this year’s Tour de France, the final climb of La Planche des Belles Filles (literally ‘the plank of the beautiful girls’) will be one of the defining moments. It is not long, but it is ferociously steep – not least at the very top where it hits 20%.

Fastest overall contender up this climb basically becomes favourite for the race as a whole. These are the guys to watch out for. 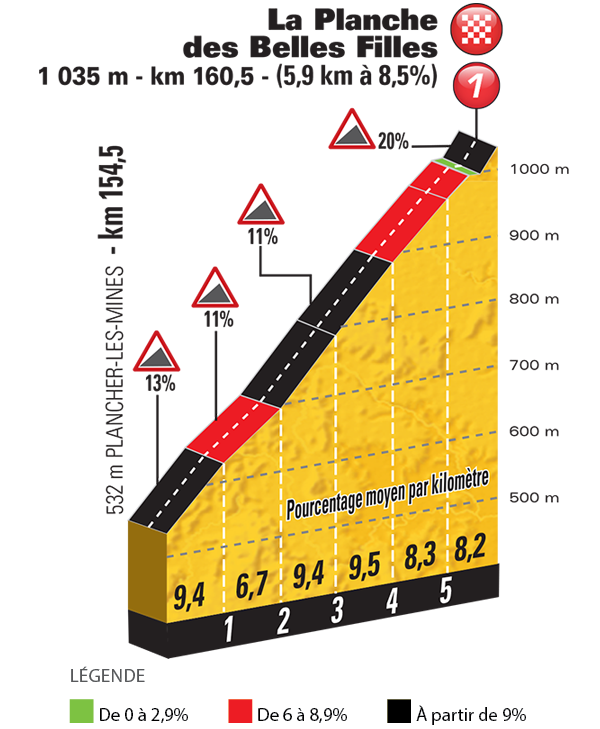