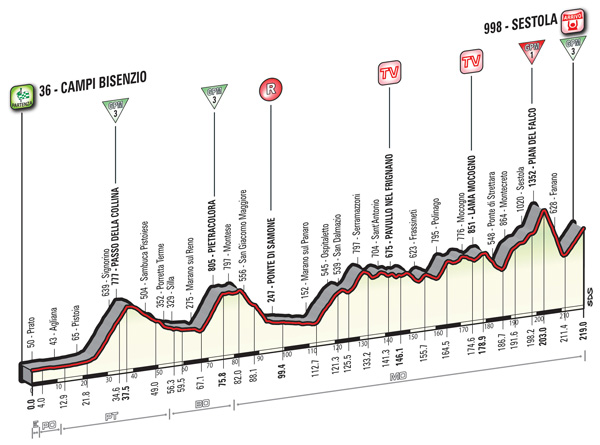 Stage 10 didn’t prove quite as messy as I’d hoped. The peloton did indeed split into small groups as predicted, but one of those small groups comprised pretty much all of the favourites. This meant that while there were a lot of meaningless time gaps, there weren’t all that many that mattered.

Giulio Ciccone, a 21-year-old, crossed the line first. He was the strongest rider in the break, despite the presence of a couple of bigger names. Ciccone had won pretty much sod all before today so I don’t really have any background to give you, I’m afraid.

A blow was struck very early on when Mikel Landa abandoned with the wild shits. Team Sky had a rest day barbecue and while I doubt they’ll admit this was the cause, they can’t stop the rest of us from drawing conclusions.

And so much for my prediction that it might be a day for Ryder Hesjedal. The Canadian was dropped on the day’s big climb and while he only lost 10 seconds or so in the end, I probably jumped the gun with hindsight. It’s not even the third week yet. Hesjedal is very much the kind of rider you’d bet on if there were an eight week Grand Tour.

Race leader Gianluca Brambilla was dropped at about the same time as Hesjedal. While he recovered on the descent, he’d clearly written the jersey off. He did some work on the front of the group on behalf of his team-mate, Bob Jungels, and then dropped off again (not asleep, that would be highly dangerous).

In many ways that final descent was the most interesting bit of the stage. Steven Kruijswijk rode into Rafal Majka halfway down and somehow both stayed upright, while Andrey Amador took the opportunity to distance everyone. For a while this looked like a blinding move, but maybe the time checks were wrong, because a gap that was nearly a minute at one point was just one second by the finish. Like most things in life, it was a lot of effort for little reward.

Marcel Kittel abandoned, by the way

He actually left after stage eight, but I missed it. The German has a tendency to be really really strong for the first couple of days while everyone’s paying maximum attention before just sort of ebbing away. Three week races aren’t really his forte.

Thanks to Brambilla’s acquiescence, Bob ‘King Of The’ Jungels moves into the lead.

I’m not putting team names in this list because I can’t be arsed typing them out. It’s bad enough that I’m having to type out Steven Kruijswijk’s name again – and now an extra time in this sentence as well.

The Po Plain is eventful enough that roundabouts get a mention in the organisers’ stage preview. The stage does get a bit bobbly at the end though, so we could have a couple of people making a break for it late on.

The confusingly laid-out and quite possibly badly translated list of local delicacies for this stage includes creamed lard with rosemary and garlic. 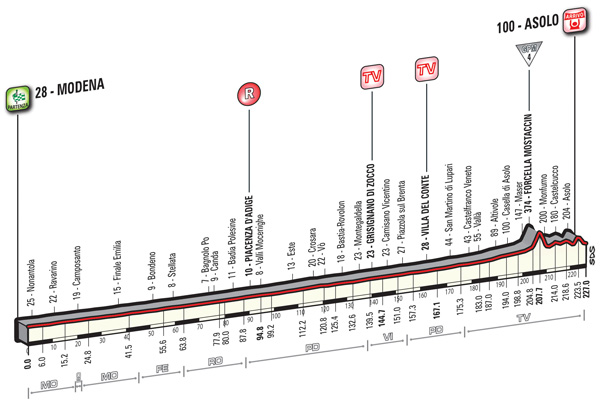