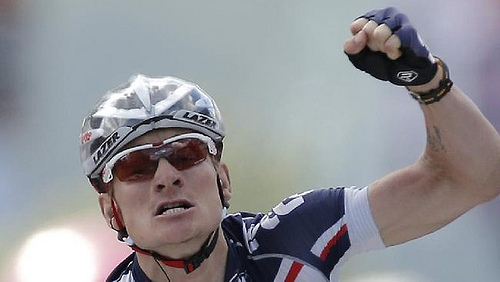 I didn’t see this. Not even the highlights. I was busy watching Prometheus for the second time in a week. Even so, I have a fair idea how it went. A wide-mouthed man emerged from behind a team-mate and punished his bike all the way to the line. After that, he decapitated a robot before attempting to destroy humanity with a virulent bioweapon.

Somewhere behind Greipel, Alberto Contador flew over his handlebars after a tool in the crowd knocked Daniele Colli off while leaning into the road with his camera. Colli snapped his arm. Contador went for X-rays, which seems a waste of time as he strikes you as being the kind of person who’ll ride if he can and won’t if he can’t. Not sure what an X-ray adds to that simple equation. Maybe he was concerned that there might be a weird squid-like creature gestating in his abdomen.

Contador will start stage seven, but apparently he partially dislocated his shoulder. He’s tough, but how tough?

A hell of a day – 264km with an uphill finish. Perhaps a day for a breakaway and being as monster endurance will be a much-needed quality, maybe Adam Hansen will be in with a chance. Good luck to him. Good luck to everyone, frankly.