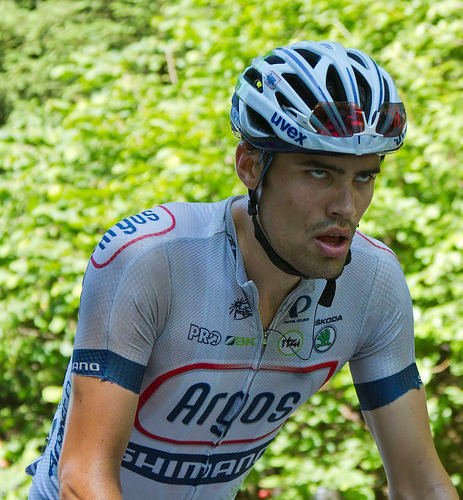 I keep calling Tom Dumoulin ‘big’ but he’s not that big. He’s not Miguel Indurain big and being as Indurain won seven Grand Tours, we can safely assume that Dumoulin’s size is no barrier to general classification success.

Stage nine finished with – and you’re not going to believe this – an uphill finish. It was a tough one too; tough enough to see miniature Esteban Chaves losing touch with some of his rivals. Pretty much everyone had an attack at one point or another, but only Dumoulin’s really stuck.

He was caught though. He was caught by Chris Froome who had employed his now traditional Vuelta tactic of letting everyone go and dieselling his way up at his own speed. By the top, he was looking stronger than anyone, so he actually changed pace and dropped everyone bar Joaquim Rodriguez.

The rules at this point go like this: Froome passes Dumoulin and Dumoulin’s head drops. Rodriguez then passes Froome and is too fast to be caught.

That sort of happened. Froome did pass Dumoulin and Rodriguez did then pass Froome. However, Froome then got back past Rodriguez, which really isn’t supposed to happen. But then it got weirder still. Dumoulin started stamping on the pedals, built up a head of steam and charged past both Rodriguez and Froome to take the stage.

This is good news. Most Grand Tour contenders are climbers at the minute. The arrival of someone who’s first and foremost a time-trialist brings balance to The Force and adds an extra dimension to three week races. I still think Dumoulin will lose a great stack of time on one of the mountain stages, but then I also thought he’d get found out on some of these tougher hill finishes.

I suppose he did get found out, in the sense that we found out he’s really good at climbing.