Nairo Quintana isn’t particularly ill as it turns out 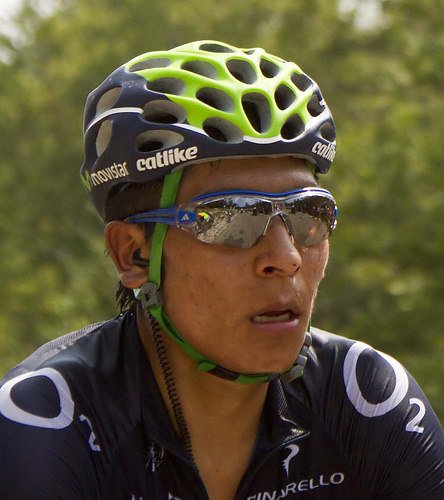 Nairo Quintana’s had a virus. He said he thought he was getting over it. I said he’d flag. On stage 14 of the Vuelta, he beat all of the major contenders, so when it comes to Nairo’s physical wellbeing, listen to him from now on, not me.

Initially, it looked like Fabio Aru would gain time on the final climb. He’s always the most game and up for an attack and on this occasion only Quintana could follow him. It was a self-defeating effort from the Italian though, because he couldn’t sustain it. Everyone caught back up to him, at which point several people – knowing for a fact that he was now done in – went past him. But whoever attacked, Quintana was able to follow them. You rather suspect he could have gained a bit more time if he could have been bothered, but he instead settled for snatching a few seconds, saving himself for the coming days.

To be honest, illness or not, we should have seen this coming. He’s always good in the third week.

Not a special single-purpose timepiece, but a new and short-lived feature in which I keep tabs on how Tom Dumoulin’s doing ahead of the time trial.

The Dutchman lost 20 seconds to a few of his rivals today. He’ll settle for that as he’s banking on recovering whole minutes in the time trial. The steeper slopes today (Sunday) and tomorrow might see bigger time gaps, but so far he’s keeping everyone within striking distance.

After all this, he’ll probably crash or puncture on the time trial, but hey-ho.

He was in the break. He won a stage the same way last year.