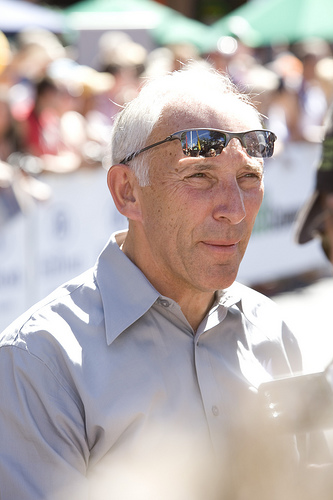 Au revoir to Phil Liggett and Paul Sherwen. This site’s received a number of comments today expressing sadness at the absence of Phil and Paul from ITV’s coverage of the race. One woman even went so far as to say that her husband would not be watching the race as a consequence, which seems oddly decisive.

Personally, I feel that viewers have been getting diminishing returns from them both for a number of years and while I have no massive objection to them, I do think it’s disrespectful to the riders and a disservice to the public that neither bothers to learn how to pronounce foreign riders’ names properly. I don’t expect perfection, but have a stab, eh? Listening to them bat Jokkims and Jakkims between each other while talking about Joaquim Rodriguez – someone who has been competing professionally since 2001 – is actually pretty offensive.

It is the end of an era and it’s okay to be a little sad, but life moves on. Hopefully people will develop just as much affection for ITV’s new commentary team of Ned Boulting and David Millar with the added benefit of halfway competent pronunciation.