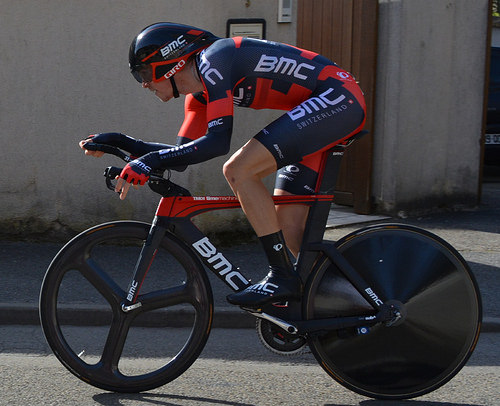 The rider called Rohan (Dennis) won the opening time trial at this year’s Tour and so earned himself a yellow item of clothing for at least a day. At an average speed of 55.4kph it was the fastest individual time trial ever, pipping Chris Boardman’s 1994 prologue effort.

A hot day and a relatively short course that was flat even by Dutch standards meant such an outcome was always likely. What’s more impressive is beating all of the other riders and what’s more impressive still is that one of those riders was Tony Martin (he came second).

Dennis is a very promising rider. I said as much earlier in the year when commentator Phil Liggett was making a tit of himself at the Tour Down Under by mocking the idea that BMC might try and support him over Cadel Evans. Dennis won that race, so in your face, Phil.

As for whether Dennis is a legitimate contender for the Tour – probably not. This is one stage of 21, which is less than five per cent, and I don’t think he’s even completed a Grand Tour yet, so it would be a bit of a leap for him to contest the biggest one of all. It’ll be interesting to see how he goes though. Clearly he can time trial and he can climb too. He has the right ingredients.

As far as the overall contenders go, they all finished surprisingly low down. Vincenzo Nibali fared best of the big four, finishing 22nd overall. He put nine seconds into Chris Froome, 15 into Alberto Contador and 18 into Nairo Quintana. Not much in the grand scheme of things, but intriguing in that I have him down as the weakest, yet on minimal evidence, he’s the strongest.

Equally intriguingly, Nibali was beaten by a couple of riders from the next tier – albeit only just. Thibaut Pinot and Tejay Van Garderen were both two seconds quicker.

Steve Cummings, the Briton who no-one knows, finished tenth. Now riding for African team, MTN-Qhubeka, he might be aiming for a high position overall. He has a tendency to win small races and not perform too well in bigger ones, but sixth in this year’s Tirrendo-Adriatico, in a strong field, indicates a decent cyclist who perhaps deserves more attention.

Thank God we’ve got that out of the way and there are no more individual time trials.

Barely less flat than the time trial. Pray for crosswinds – which are actually fairly likely in this part of the world.