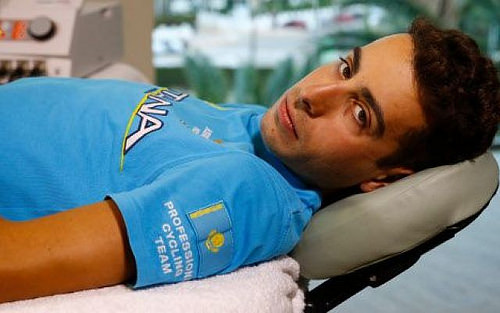 The nuts and bolts of the story are these. At the foot of the really-rather-nasty Mortirolo climb (12.4km at 10.5%) – the penultimate of the day – Alberto Contador was on his own, about a minute behind Fabio Aru’s group, having punctured. At the summit, he was two minutes ahead.

Being as Aru’s Astana team were driving the pace and trying to keep Contador at bay throughout this miraculous reversal, the story is quite easy to paint as Peerless Contador Does Legendary Thing In Bike Race. And indeed that’s precisely what many media outlets have done.

I’m going to take a greyer view – not grey as in there’s something suspicious, but grey as in it’s not that clear-cut. Contador was certainly far superior to Aru on that climb, but the truth is so were many other people.

The Italian is flagging badly. Let this be a lesson to all those overall contenders who start racing in the first week of a Grand Tour. If you’re competing for the overall, first weeks are for surviving, not racing. Every day that Aru has made extra efforts, he has dipped into his energy reserves. As his energy reserves have diminished, he has struggled more and more. Every day he has struggled, he has been forced to make extra efforts. This might get nasty for him.

And for all that Contador’s ride was majestic, he didn’t actually win the stage. That honour again went to Aru’s team-mate, Mikel Landa, who also won stage 15. After getting the okay from Aru, Landa followed Contador and Dutchman Steven Kruijswijk away from his stricken leader and sat behind them until 4km from the finish. At this point he tore off and was never seen again. In those few minutes, he opened up a 38 second gap and vaulted into second place overall.

Andrey Amador finished 2m03s down and slipped from third to fourth. Aru was 2m51s behind and went from second to third. The other big winner was Kruijswijk who despite having the widest shoulders in professional cycling appears to be one of the strongest climbers in this race. He rose from 14th to 8th, but frankly I’d quite like him to abandon because typing his name’s a bloody nightmare.

Just one categorised climb and a few lumps and bumps later on. In theory, it shouldn’t prove too dramatic, but don’t count on that in this Giro.