Steep gravel and dehydration – together they are Alberto Contador’s kryptonite 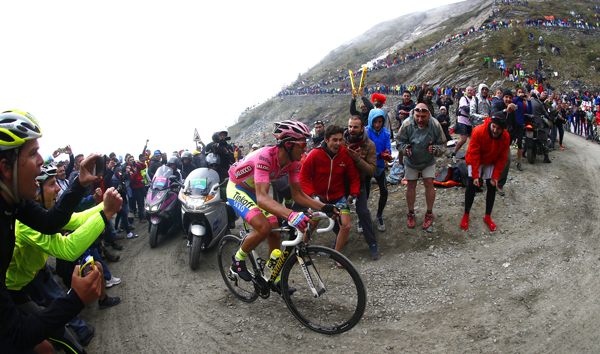 The final stage is a flat stage, so Alberto Contador will win the 2015 Giro d’Italia. He had a bloody good go at losing it on stage 20, but he’d built up such an advantage, it simply wasn’t possible.

The day was all about the Colle delle Finestre, an 18km climb that was pretty much 9.2% all the way up. That would be tough enough in itself, but halfway up the road turned to shit. A surface that was a mixture of dirt and gravel was worth a couple of percentage points in itself, but it also meant that it was hard to climb out of the saddle as the rear wheel would lose traction. Perhaps that had an impact, because when Contador climbs, he invariably stands for long periods.

Once they’d hit the crappy surface, third-placed Mikel Landa attacked. Soon enough, he’d gained a minute on Contador, Fabio Aru and a few other general classification types. Landa appears to have been the strongest climber in the race, which is slightly weird as usually the strongest climber is also the guy who wins.

The guy who wins – Contador – wasn’t too bothered about Landa because his countryman was by now five minutes back in the general classification – plus there was a long way to go. However, everything went wobbly a few kilometres later when Ryder Hesjedal had a go.

Hesjedal himself was no great danger, but what was more meaningful was that everyone else in the group managed to follow him except Contador. Suddenly the Spaniard was riding on his own and while Landa riding on his own ahead of a group had little chance of gaining a lot of time, a group riding ahead of Contador on his own most certainly did.

But it didn’t really happen

Contador paced himself. He said as much himself.

“I was never afraid of losing the the Giro d’Italia. Perhaps it was a self-control mechanism, because if you think that you might lose, then you think you have to close the gap in a kilometre and then you are going to have a really bad crisis.

“I wanted to stay calm, I didn’t want to push more than necessary on the descent. I knew that the important thing was a drop onto a bigger cog to keep a good cadence to the finish and it went pretty well for me.”

Contador lost a couple of minutes, which is a lot, but considering there’d been 20-odd kilometres to go when he was dropped, it could have been far, far worse. He claims his moment of weakness was down to dehydration, that he’d not taken enough fluid on board after the previous stage. Maybe that’s true, or maybe it’s just the kind of thing top cyclists tell themselves when they struggle.

Ahead of him, Landa and Aru linked up. The former did the work and then the latter raced off and won the stage.

Scran of the Stage

Cajettes, which is basically gnocchi with nettles.

Flat with a sprint finish. The final stage of the Tour de France is quite the occasion, but in general I do think a sprint finish is rather a dull way to finish a Grand Tour.