Down France and across Italy in under a thousand words 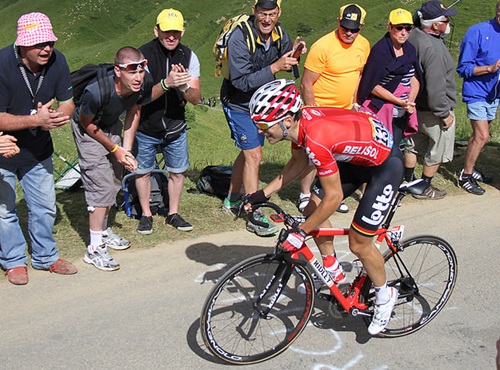 Let’s have a quick round-up of all the major racing since Ian Stannard took the Omloop for the second time (not a euphemism). That basically means Paris-Nice and Tirreno-Adriatico as I’ll tick Strade Bianche off in this opening section by matter-of-factly telling you that Zdenek Stybar won.

Zdenek’s been promising this sort of thing for a while. As well as winning the 2013 Eneco Tour, which is a kind of spring-classics-themed stage race, he also finished fifth in Paris-Roubaix last year and seventh in Milan-Remo. Look out for him in the weekends to come.

Being as he entered the closing kilometres accompanied only by Alejandro Valverde and Greg Van Avermaet, it was almost a foregone conclusion that Stybar would win. Those two riders currently possess far bigger reputations than the Czech, but those reputations are largely built on finishing second. Valverde’s famously always worth beating, while Greg Van Avermaet is very much the bridesmaid’s bridesmaid when it comes to spring one-day races.

Already at a disadvantage to its cousin Tirreno-Adriatico thanks to its somewhat second-rate start list, Paris-Nice did itself no favours at all by being utterly shit for the first few days. Then, just when you were about to start learning Italian, it suddenly became bloody amazing.

The upshot was that Gallopin’ Tony was in the lead overall with just the Col d’Eze uphill time trial to come. Porte was second, Kwiatkowski third and Thomas fourth. It seemed like it was going to be tight, but as it turned out, Porte monstered the time trial and won by some margin. However, Gallopin’ Tony had impressed and is worth watching. Michal Kwiatkowski came second overall with Simon Spilak, who always does well in one-week races, third.

Thomas dropped to fifth, which was another confusingly tidy performance in a hilly stage race ahead of the not-particularly-hilly one-day races he’s supposed to be suited to.

Nairo Quintana won the race after also taking the big mountain stage. It wasn’t dramatic in the way the big Paris-Nice stage was. He basically just rode away. Alberto Contador couldn’t stay with him and eventually ended up fifth overall. Vincenzo Nibali couldn’t even stay with Contador and finished 20th overall.

Other than that, three major spring classics contenders showed form. Peter Sagan won a stage, Fabian Cancellara won the closing 10km time trial and even Greg Van Avermaet managed to cross the line first for once.