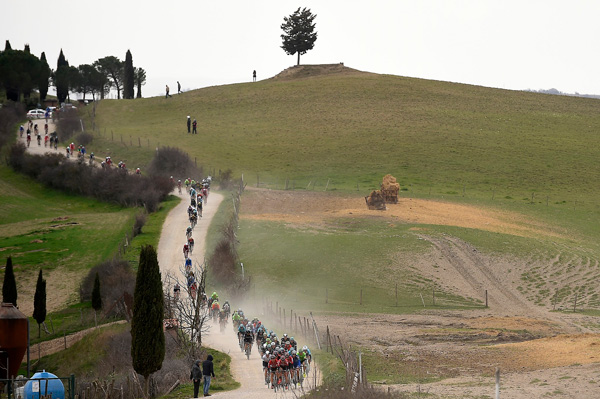 As in ‘returned’. He hasn’t got ankylosing spondylitis or anything.

Michal Kwiatkowski hasn’t had a spectacularly successful time at Team Sky thus far. In 2014, at what was then Omega Pharma-Quick Step, he won Strade Bianche and became world champion and finished on the podium in La Fleche Wallonne and Liege-Bastogne-Liege – all big races. A year later, he won Amstel Gold, which is pretty big, and came second in Paris-Nice.

At Sky, he’s won E3 Harelbeke, the race named after a motorway that no longer exists – and that’s it.

Or at least it was until today, because today he won Strade Bianche again, wandering off on his own with about 15km to go.

There was also a return to form from Greg Van Avermaet, who reverted to his more customary second place after inadvertently notching a bunch of wins in the last 12 months: “I’d have loved to win here today because it’s such a nice race but at the end, I have to be happy to just finish safe,” he said.

Greg’s grand rhetoric continued, as he added: “Every year I come with the expectation of winning but I’m getting older.”

A new regular feature titled ‘Greg Van Avermaet’s Fighting Talk’ may or may not begin here.