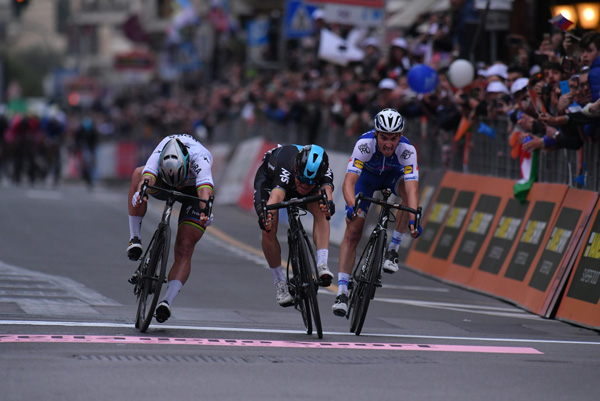 Peter Sagan is such a colossal figure in cycling that it’s odd to thing he doesn’t necessarily have more of a claim to greatness than Michal Kwiatkowski.

Sagan does wheelies and snarfs Gold Bears like some sort of Haribo-vacuum. Michal Kwiatkowski is a Polish guy with sticky-out ears.

But performance-wise, what’s in it? Sagan is of course world champion, but Kwiatkowski’s been there, done that. Sagan’s won the Tour of Flanders; Kwiatkowski’s won Milan-Sanremo. Drop down a step and Sagan’s won Gent-Wevelgem a couple of times and E3 Harelbeke; Kwiatkowski’s got a pair of Strade Bianches and an Amstel Gold.

You don’t have to know what all these races are. My point is that if Sagan wins a bit more often, there isn’t really anything between them when it comes to the big stuff – yet Sagan’s the focus of the sport and the Pole’s just some guy who beats him half the time.

Towards the end of this year’s Milan-Sanremo, Sagan launched a visceral attack on the Poggio and only Kwiatkowski and Julian Alaphilippe could follow.

The commentators spent a little while discussing whether there’d been a rider quite like Sagan since Eddy Merckx at this point. And then Kwiatkowski won.

Speaking after the race, the Pole said: “I can’t believe I’ve beaten Sagan.”

It’s hardly unheard of. You’d think he’d have come to terms with it by now.