Greg Van Avermaet cobbles together a decent start to the spring 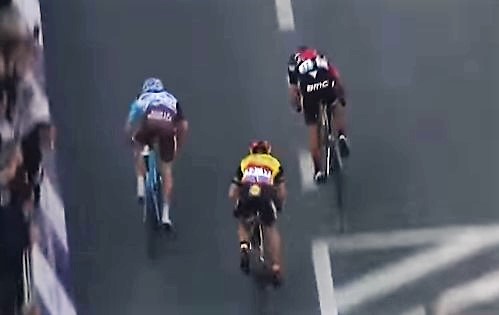 Welcome to the next exciting instalment of Greg Van Avermaet’s Fighting Talk. After winning E3 Harelbeke on Friday, the Olympic champion was effusive, offering, “I’m happy things are not so bad,” as his verdict on the race.

The Belgian followed that up with victory in Gent-Wevelgem too. Having also won Omloop Het Nieuwsblad a few weeks ago, he’s rather cornering the market in cobbled races which aren’t quite the most important ones but which aren’t far off. See here for a list of the bike races that actually matter. Both of his wins this weekend are on there.

You can tell a lot about how important these races are by the previous winners: Tom Boonen, Fabian Cancellara, Peter Sagan, Geraint Thomas and Michal Kwiatkowski for E3 Harelbeke; Boonen, Sagan, John Degenkolb, Luca Paolini and Sagan again for Omloop Het Nieuwsblad.

The Tour of Flanders

Second in 2014 and third in 2015, Van Avermaet is one of the obvious favourites for the second Monument of the season on Sunday. It’s not just that he’s in form; he’s in form on the exact roads and climbs on which the race will be taking place.

Flanders is not a big place and so its 826 one-day races are all basically variations on a theme, picking from a palette of climbs and combining them in different ways. Almost all of them look like a great spaghetti splat when viewed on a map, weaving around and going back and forth across the same patch of terrain.

The Tour of Flanders is excellent, by the way. Long and punishing with steep hills, cobbles and unhinged screaming Belgian fans, it’s got everything – and it’s also a great excuse to drink some tripels, as if you need one.