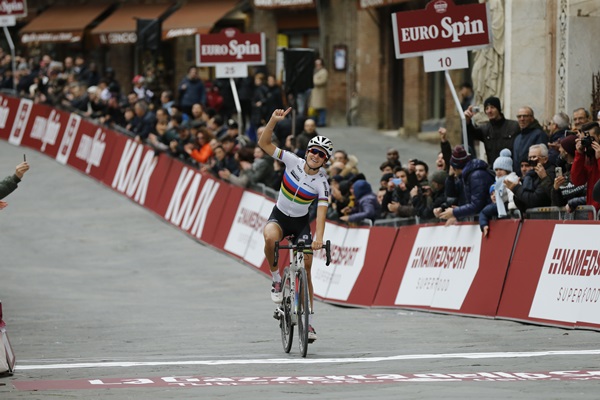 Do women actually have an Omloop, you might ask? Of course they do. Lizzie Armitstead won it last week in what was her first competitive outing of the season.

This wasn’t entirely surprising. Armitstead is already British and World Champion. She’s a fabulous rider and the only downside to her dominance is that I have to keep typing her name. I’ve recently added ‘Armistread’ and ‘Armitstread’ to the more conventional ‘Armistead’ error. I fully expect ‘Armpitstead’ and ‘Armpitstread’ to follow before too long.

Yesterday our hero competed in, and therefore won, Strade Bianche. It is the first race of what was once the UCI Women Road World Cup (which Armitstead won in 2014 and 2015) and what is now the UCI Women’s WorldTour (inexplicably without a space in that last word).

The Women’s WorldTour comprises 17 events – both one-day and stage races – and means that women’s road racing is actually strangely coherent. It’s one-day races each weekend in the spring, stage racing in the summer and then back to day races after the women’s Giro d’Italia in July.

Fabian Cancellara won the men’s Strade Bianche. It’s the third time he’s won, so they’ve named a pile of gravel after him in tribute. It’s the sixth stretch used in the race. I don’t know if that’s a particularly good stretch of dirt road or what, but I’m sure he’ll take it as a great compliment.

Cancellara is obviously in decent form in what is supposed to be his final season. His next big target will be Milan-San in a fortnight.