One of the site’s readers, Bert, was there in person for stage two. He writes:

First, a summary of the whole experience. We sat on someone’s garden wall alongside the route in Elland. A man came out to speak to us. “That’s my wall,” he said. “Oh, sorry,” we said. “Not at all,” he said, “I just wanted to say hello and tell you to enjoy yourselves. Do you want a cup of tea?”

Now, onto the race itself. I know nothing about sport cycling beyond the basics, and of course what I have learned from the esteemed writer of this website. He said that it’s all about teams, that while it is individuals who win the prizes it’s the teams that make that possible. He also said that there was much more to the day than just watching the teams come past. So, armed with this information I watched the action intently. When the race arrived, the excitement was palpable.

First out of the blocks was Team Fruit Shoot. They seem to have made a breakaway from the peloton, probably due to the 90% sugar content of their favoured sports drink. 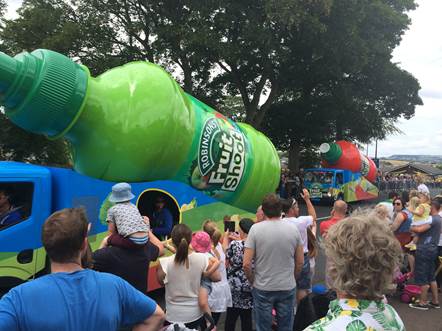 The excitement rose to fever pitch a few moments later, as the local boys came past. 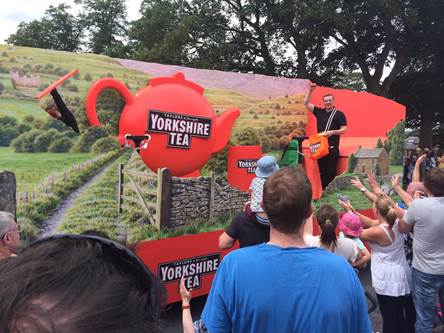 Then the bulk of the peloton came through, led by a French team. Just look at the effort on the lead rider’s face as he cuts through the air. You can see how much easier it is for his team mates in close pursuit, allowing them to concentrate on looking camp and balancing on their meringues. 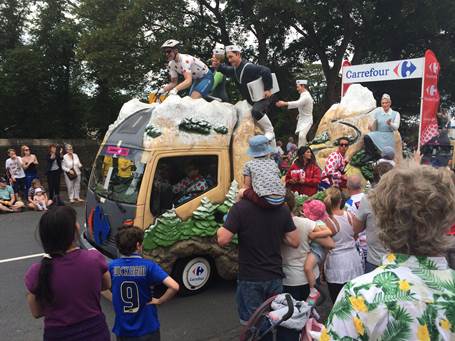 Much has been made on this website of the aggregation of marginal gains in cycling, and this was to the fore in this race. Others might have thought that any old French wine would do, but note the superior streamlining of Burgundy over the less efficient claret bottle. True attention to detail, that. 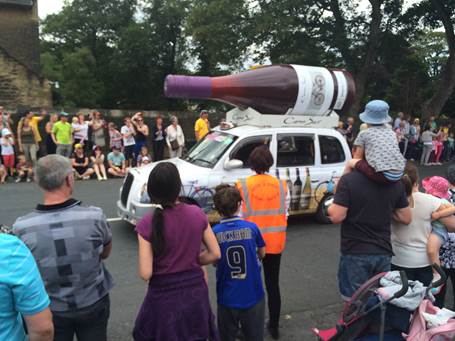 More attention to detail from the next team through, who kept a tight formation of their cyclists by attaching them all to a single piece of cardboard. The team manager can be seen close by, in a paraglider being towed by a cow. 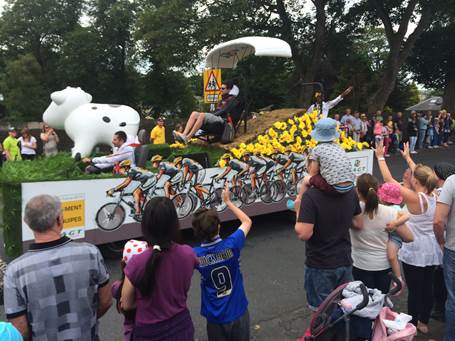 All the teams were heavily sponsored, mostly by sports and nutrition products, and the final team through was no exception. 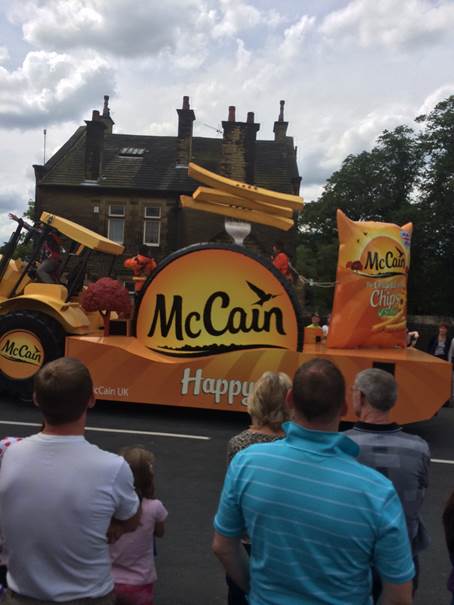 After all this, we were just packing up to go when the organisers surprised us by having a post-race fun parade. This seemed to consist of an indescribably dangerous combination of push bikes, motor bikes and cars all trying to be on the same patch of road. They looked like they were having a lot of fun following the race, so we cheered them loudly. 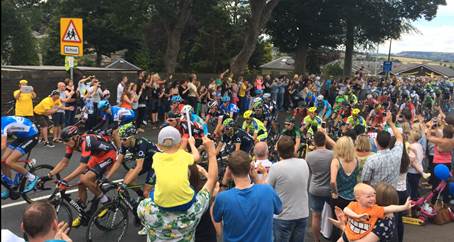 All in all, it was a brilliant experience. I had tickets for the Test match at Trent Bridge on the Friday and I thought that would be the highlight of my sporting week. In Test match cricket the trick is to maintain the excitement over five days of action. In bike racing the trick, and one they pulled off magnificently, is to make 30 seconds of action into a three hour experience. My wife suggested I phone them up to ask how it’s done, I’m not sure why.

Thanks for that, Bert. It made for an excellent rest day update. It’s a shame I have to bring you all back down by returning to normal service.

Stage 11 features a few climbs, but not big climbs. Here’s the profile. It looks like a Sagan today, but don’t they all?