I daresay he’ll do a few more, but in years to come, this will be the descent that people remember.

“If I finished the day lying on my face among the tomato plants and shards of glass, so be it,” said Sean Kelly about his descent of the Poggio en route to winning the 1992 Milan-San Remo. Kelly is not a man fazed by daredevil descending, but on Eurosport he pronounced himself “scared” while watching Chris Froome.

It’s always a bit more nerve-wracking watching someone else, because you’re not the one in control – but even so, the Team Sky man went some on stage eight. Riders often get down on the top tube, their chests pressed against the bars when descending, and some pedal from this position, but it’s rare for someone to stick with this approach for quite so long as Froome did.

It looked dicey. Which is because it was. ‘Good’ descending is all about going as close to death as you can without accidentally taking that final step. It’s a horrible business.

“I’m not surprised. He’s a bit of a nutcase when it comes to that,” was team-mate Geraint Thomas’s view.

Here’s a quick video. Don’t try this at home kids. Nor anywhere else.

What did Froome get out of it?

He got the stage win and being as Greg Van Avermaet had been dropped long, long before, he also got the yellow jersey. Most importantly of all, he got 13 seconds plus a 10 second time bonus on all his rivals. It’s not a huge amount, but you’d sooner have it than not. Particularly as he also retained his life.

What else did he do?

He elbowed a guy in the face.

As far as other people go, Thibaut Pinot attacked on the Tourmalet and then found himself both caught and dropped two mountains later, while Alberto Contador lost touch (and hope) on the final climb of the day.

Dan Martin came second on the stage, which is good, while Adam Yates managed to hang with the favourites until the end and so moves up to second overall, which is also good.

Our first summit finish, so there should be plenty more general classification activity.

Specialities of this region include trinxat de muntanya (cabbage and potato omelette with bacon) as well as what the Tour organisers refer to as “beef meat”. 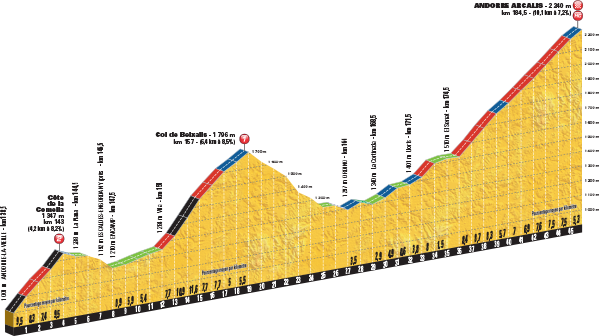