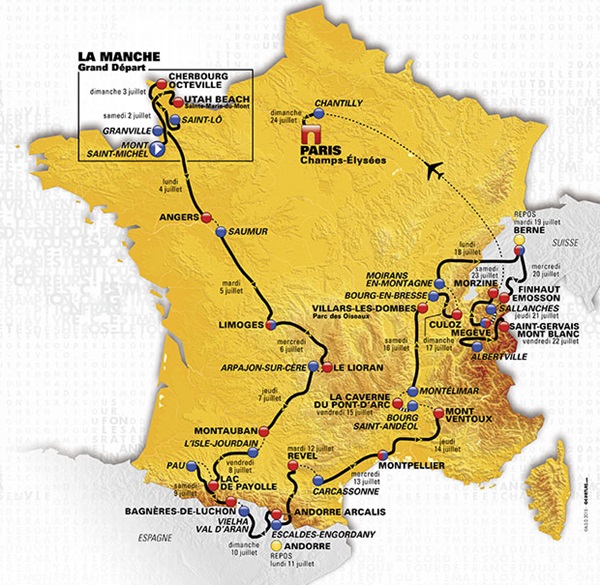 All of them, obviously – but let’s just try and get a bit of a handle on the route in a bid to work out where the race could be won and lost.

Stages one, three and four look like sprint stages. Stage two is a relatively flat day with an uphill finish which should make life interesting.

Stage five is an oddity, seemingly dropped in from later in the race. It features a few moderate climbs and is uphill to the line.

Stage six is another flatty and then Friday to Sunday brings a Pyrenean triptych which will start to shape the general classification. Stage seven reminds the riders that they’ll be needing their climbing legs. Stage eight features the monstrous Col du Tourmalet early on plus three subsequent climbs to further sap the strength. Stage nine then polishes things off with a 10km climb to a summit finish before the first rest day.

Monday July 11 is that rest day.

After that, the race heads east.

Stage 10 starts with a big climb and is then basically flat but with a see-what-happens kind of hill 7km from the finish. Stage 11 is a flatty.

Then comes Bastille Day and a finish at the top of Mont Ventoux – either of those factors would make stage 12 a big deal.

After that, the riders will have to force their weary legs to their limits for stage 13, the first time trial. It’s 37km long and has a couple of moderate climbs in it.

Stages 14 and 16 are flat bread around a spiky mountainous filling in a pre-rest day sandwich. Stage 15 features the Grand Colombier (twice) and four other climbs.

The race is on now and it will be decided via an Alpine quadriptych (sorry, but felt obliged to write that after using triptych about the Pyrenees above).

Stage 17 doesn’t dick about, delivering a summit finish the day after the rest day.

Stage 18 is near enough a cronoscalata. It’s uphill for 15km, with at least 2km of that at double digit gradients, and then 2km downhill to the finish (and quite a steep descent too, if my maths is correct, which it almost certainly isn’t).

Stage 19 has three climbs and then a summit finish.

Stage 20 is not a summit finish, but the final climb is the long and hard Col de Joux Plane, which also gets steeper towards the top. From there it’s 12km downhill to overall victory in the Tour de France.

Stage 21 is the usual prancing around without purpose before a sprint on the Champs Élysées.