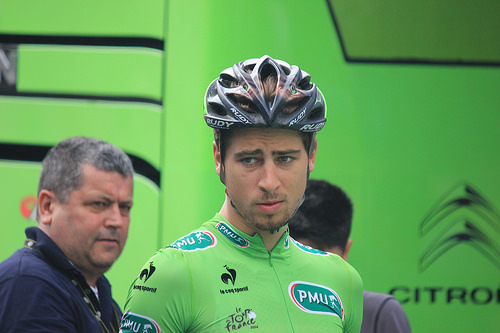 I’ve been putting off writing this points competition preview for a few days now and presumed there was some reason for this – nothing conscious, just some mystic message from the cosmos saying: “No, don’t bother yet. Play Civilization or go to the pub or something.”

Turns out the cosmos was right. Everyone else is now stuck with a green jersey preview featuring Nacer Bouhanni, but Bouhanni has today withdrawn from the race after he bust his hand punching a drunk bloke’s tooth out after he kept him awake the night before the French national championships. Bouhanni was an amateur boxer in his youth, still trains like one in winter, and reckons he might try and turn pro after he finishes his cycling career. Odd bloke.

So in the absence of Bouhanni – who I’ll be honest was a bit of an outsider anyway – who’s likely to win this year’s Tour de France green jersey competition? (Click here for an explanation of what that is.)

Won it in 2012, 2013, 2014 and 2015. If he’d trade this year’s green jersey for an increasingly elusive stage win, it’s irrelevant. The pursuit of wins brings points and nobody is able to pursue quite so many stages as Sagan.

After going Awol in 2015, Kittel appears to be back. The early stages of the Giro d’Italia showed that he’s likely to be the fastest in flat finishes. However, the later stages of that race – and more precisely all of the bits in Italy – showed that Kittel isn’t the most resilient. Even in good form, he can’t climb for shit and the tougher stages will really take it out of him. Expect him to fade.

Everyone discounts Greipel, but he’s always competitive and at the Giro he loomed to prominence to fill the void left by his countryman above. There are more flat sprint stages this year and being as they carry more points than hilly stages, the out-and-out sprinters might well be vying with Sagan for supremacy. Greipel is certainly one of the big boys and could be in the mix.

Cav was actually the last non-Sagan to win the green jersey, back in 2011. If the slightly more sprint-oriented route favours him, his Olympic track ambitions might counteract that. The Manxman might even abandon the Tour before the end if he thinks it’ll help him be in prime shape for Rio.

Basically the anti-Kittel. A foulweather cyclist who isn’t the quickest when conditions are good and he’s feeling fresh, but who will rise to prominence as his rivals tire or when the weather’s all shitty.

Someone who sprints, rather than a sprinter. The Australian is however one of the few who can compete on all the same stages as Sagan, which gives him a crucial advantage over many.

A few other names that just about warrant a mention:

Edvald Boasson Hagen is of a similar oeuvre to Sagan and Matthews, but rides for the same team as Cavendish and so will be on team duty most days.

Miniature Frenchman Bryan Cocquard always seems keen to take points in this competition, but hasn’t yet won any major races.

John Degenkolb would normally compete but hasn’t shown any signs that he’s back in form after a British pensioner drove her car into him and his team-mates in Alicante in January.