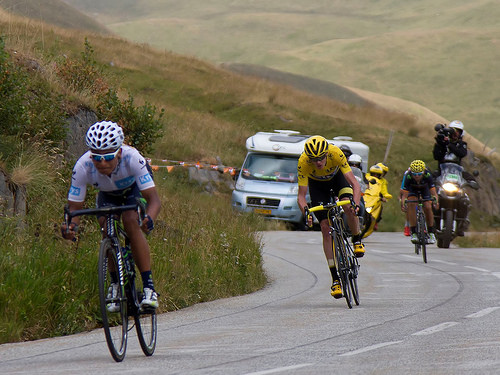 Who’s going to win the Tour de France? Probably not Bartosz Huzarski or Tsgabo Grmay unless an awfully large number of people abandon the race injured.

Maybe one of these guys though.

Both times he’s won the Tour, Froome’s ceded ground to Nairo Quintana in the mountains in the final week. He says he’s arriving at this year’s race fresher, which may mean a slower start but is intended to ensure a stronger finish. That said, Team Sky will doubtless deploy their Classics riders on the early flat stages in the hopes of splitting the peloton. Last year Froome gained 1m28s on Quintana on the opening sprint stage and only actually beat him by 1m12s overall.

See above. Quintana was the strongest in the mountains and there’s a general feeling that he’s getting stronger and stronger by the year.

If he ultimately faded, Contador’s recent win in the uphill prologue at the Criteriu du Dauphiné was a little tremor of what might be. He’s not the obviously superior climber he once was, but this showed that he’s still there or thereabouts. Marry that to unbreakable spirit and you can see why he’s won so many three-week races. He also has no interest in finishing anywhere other than first and will attack daily in the final week rather than protecting a lesser spot.

Fabio Aru (or is it Vincenzo Nibali)

Aru came second in last year’s Giro d’Italia before winning the Vuelta a Espana. This gave him the status to be named Astana’s main rider for this year’s Tour. Since then, he’s been shit. Team-mate Vincenzo Nibali, a former Tour winner who isn’t best pleased about playing second fiddle, has since won this year’s Giro which has opened the doors of a cattery located in St Mark’s Square in Venice.

Porte can pretty much win one-week races in his sleep, but somehow there’s always a bad day in longer races. He climbs and time trials as well as anyone, but only for 20 days out of 21. Tejay Van Garderen is his team-mate and might well prove stronger. Or he might not.

A few other names

I know many Britons think Froome’s a bit of a tool. If you fall into this category, others you might support include Geraint Thomas and Adam Yates. Thomas you know, although it doesn’t look like his form’s as good as it was last year, despite greater focus on the Tour. Young Yates might aim for the overall rather than going for stage wins this year.

There’s also the decidedly Brummie Irishman, Dan Martin, who turned into Joaquim Rodriguez at the Criterium du Dauphiné and looks like he might finally compete at a Grand Tour.

Across the channel, Thibaut Pinot will probably bin his overall prospects via a massive strop in the first week, but if he doesn’t, he can climb and is a young, improving rider. Romain Bardet is another Frenchy and another climber and of a similar age and not-quite-up-there-with-the-big-boys-yet standard to Pinot. He also rides for the same team as my man Domenico Pozzovivo, the man who can’t descend, time trial, or cycle on the flat. Third Frenchman is Warren Barguil, who is a bit more of an outsider but is included because it’s always good to do things in threes if you have the option.

Ilnur Zakarin is surely too knackered to do much. He raced almost all of the Giro before breaking his collarbone. That was only the second Grand Tour he’d ever ridden, so I can’t see him having much left. He rides for the same team as Joaquim Rodriguez who sadly seems to be reduced to racing for stage wins these days.

Finally, Alejandro Valverde rides in support of Quintana. However, while that and preparing for the Olympics might be the plan, this is Valverde we’re talking about. He’s a compulsive bike racer. If he feels okay, he’ll probably try and beat whoever’s next to him – even if that’s his team-mate.