Ding from Contador and dong from Froome 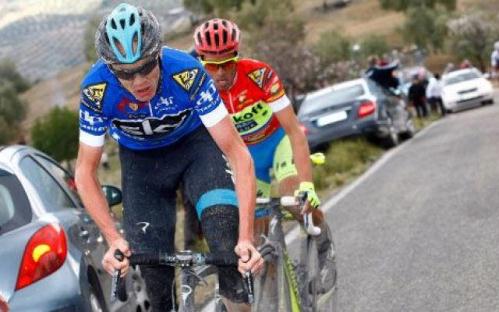 Which sounds a bit disgusting. Let’s gloss over that.

Ding dong battles are rare in cycling. Ding ding battles are more common because if you’re fitter and faster than someone one day, that rarely changes overnight. Chris Froome and Alberto Contador seem to be prone to them however with the latest taking place last week at the Vuelta a Andalucia.

There were two summit finishes. On the first, Contador, with the help of Ivan Basso, pushed the pace on a steep bit, gained 30 seconds and kept it. Froome was quick to make the perfectly valid point that his rival was ahead in his training. Contador needs to be in top shape for the Giro in May whereas Froome won’t be at his best until the Tour in July. The spindly, lipless wonder then completely negated that argument by winning the next day. He was the last of several Sky riders to attack and gained enough time to take the overall lead by a whopping two seconds. Those two seconds were enough for him to win the race, but it was striking that the third-placed rider, Benat Inxausti, was 2m38s back.

The great thing about Froome v Contador is not necessarily their exceptional ability but how evenly matched they are. A contest trumps dominance when it comes to column inches and even if they let us down last year through their inability to remain upright at the Tour, they did at least treat us to even more slightly lower stakes duelling at the Vuelta. If this year’s Tour gets all mano a mano then it will not be a tale lacking in back story.

Geraint Thomas won the Tour of the Algarve ahead of Michal Kwiatkowski after wandering off ahead of everyone at the end of the hilly second stage. There are two ways of looking at this. Clearly, he’s in form, but at the same time he’s aiming to win one-day races in the next month, not stage races. To a great extent fitness is fitness, but Thomas often seems to find a way of falling between the stage racing stool and the one-day stool.

The Tour of Oman also took place. It’s been quite a big deal in recent years having tended to attract the top riders, but with Contador and Froome in Spain, attention was elsewhere in 2015. Despite this, there was arguably a stronger field overall. Rafael Valls took the win ahead of Tejay van Garderen, Alejandro Valverde and Rafal Majka. If you don’t know Valls, he’s been tipped for greatness by no lesser a tipster than Pro Cycling Manager 2011

The Omloop. That’s on Saturday. Former winner Ian Stannard will be there, as will Bradley Wiggins, Tom Boonen, Philippe Gilbert, Niki Terpstra, Alexander Kristoff and all manner of Belgians whose names you’ve read once and sort of recognise but aren’t quite sure where from.

A week later, it’s Strade Bianche and then Paris-Nice and Tirreno-Adriatico do their overlapping thing before Milan – San Remo ushers in the spring.