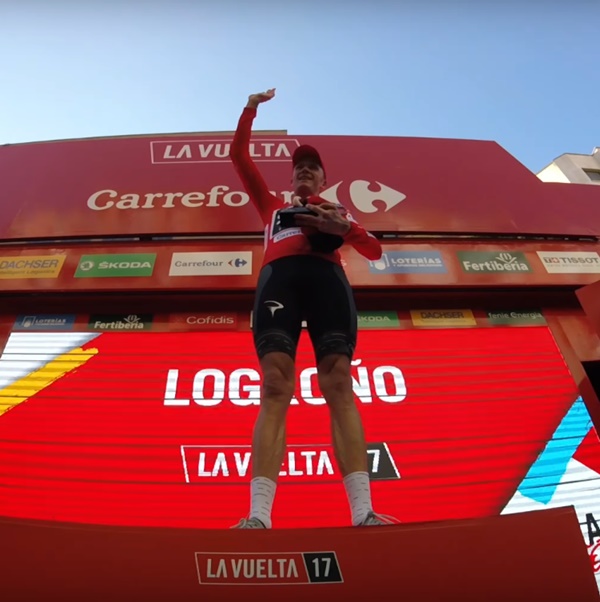 Looking up to Chris Froome, same as everyone else (all photos via YouTube)

The Final Week Wrap is an attempt to give an overview of how the Vuelta a Espana was won. As such, it focuses on the general classification – which is the overall race – rather than stage wins.

If there was a theme to the final week of this year’s Vuelta, it was that many of those who’d ridden the Tour de France faded and vacated top ten spots for those who hadn’t.

Chris Froome was not among them – which isn’t to say he didn’t show signs of weakness. 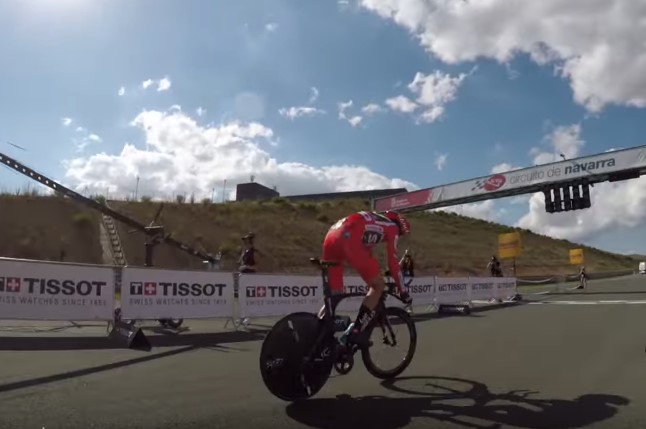 Time trials aren’t as common as they once were, which has led to a greater number of Grand Tour contenders who are first and foremost climbers. Whenever they do throw in a relatively flat race against the clock, you aren’t half reminded of that.

A large proportion of the top ten had a very bad day. Riders like Fabio Aru and Esteban Chaves looked like they were doing the wrong sport.

However, it is the nature of hierarchies that for every nightmare, someone else profited.

It was a good day for Alberto Contador, who started the day on the wrong side of a whole bunch of mountain flyweights and ended it above them. Wilco Kelderman, Ilnur Zakarin and Vincenzo Nibali also fared well – but Chris Froome dicked them all and won the stage. As expected.

It’s probably worth giving stage results on this occasion as it’s a lesson in why some otherwise high profile riders don’t win Grand Tours. A quick glance will be enough to tell you that several of the major names aren’t even in shot. Chaves, for example, lost four minutes.

You ain’t going to make that up in bonus seconds at intermediate sprints. 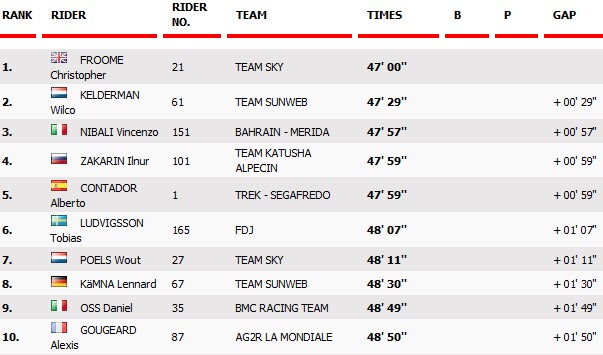 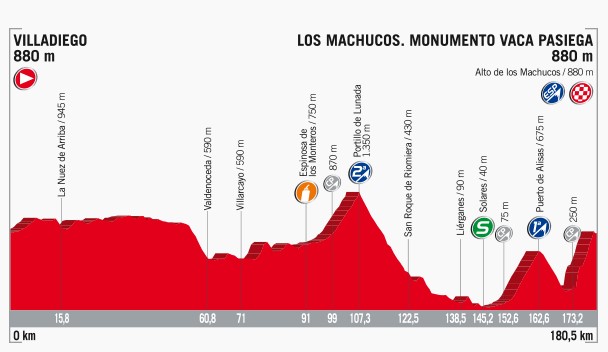 It was quite a surprise that the Vuelta should tolerate even one flat stage, so we swiftly returned to the mountains.

Alto de los Machucos is one of those roads that blurs the line between ground and wall. It’s the kind of thing you only ever really see in the Vuelta.

The day began with Froome 1m58s ahead of Nibali, 2m40s ahead of Kelderman and with everyone else needing to do something dramatic to warrant a mention in this kind of a paragraph.

Everyone hit the foot of the climb together, but Contador and Miguel Angel Lopez forged ahead early. The Spaniard, who has always spent a ludicrous proportion of his time riding out of the saddle, found the steep slopes to his liking and soon had a minute gap to Froome.

For his part, the Team Sky man was doing his usual thing, where he’s either pacing himself beautifully or absolutely knackered. He falls behind so often on these climbs that it’s never as dramatic as it really should be.

On this occasion, the later acceleration never came, so with hindsight he was dropped.

Stage results again? Why the devil not? Froome was four seconds from being visible on this screengrab and at this point one couldn’t help but wonder whether the Angliru on Saturday might give rise to something similar-to-worse for him. 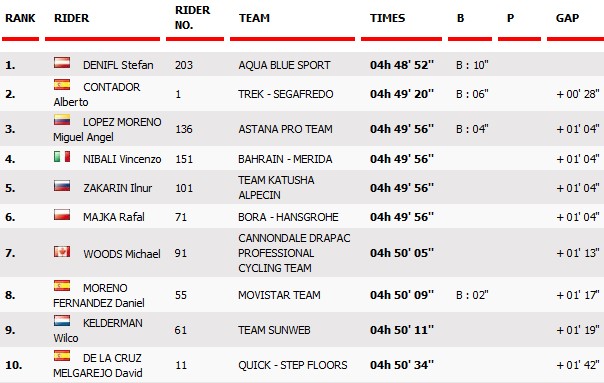 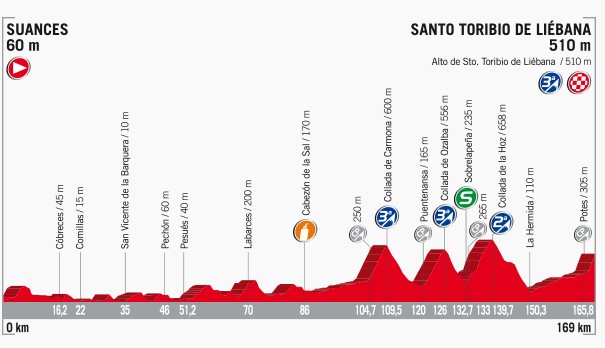 Froome’s advantage over Nibali was now 1m16s and seemingly heading in the wrong direction. These shallower slopes were more to his liking, however, and what had seemed a nothingy sort of stage compared to what had preceded it actually resulted in the Sicilian losing 21 seconds. Froome was back on track.

Nibali’s countryman Fabio Aru also managed to gain time, albeit largely because no-one gives a toss about him any more. He spent a good long while riding on his own and gained 12 meaningless seconds that he’d shed with payday loan interest later in the week, finishing 15 minutes back on the Angliru.

Contador also attacked – more times than I can count – but never got away from Froome for long.

This barely needs saying, but Contador attacked again. He was caught, but I’m not really sure that’s the point any more. This was just something that had to happen.

Contador was racing towards retirement in finer style than with a dull victory. His riding in this race was more than that. He took asphalt and a numerical value for ‘kilometres to go’ and did some sort of alchemy to create something far more entertaining and admirable than plain old physical superiority. 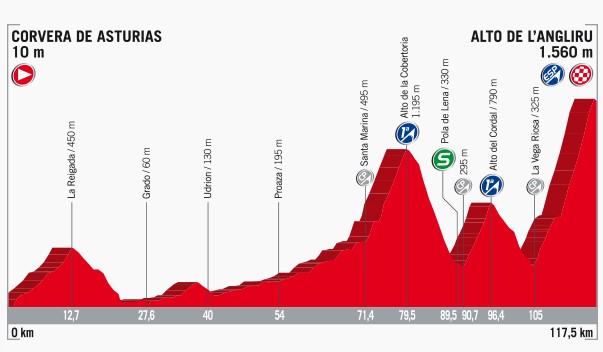 “What if we’re still not quite sure who’s best at summit finishes by the time we hit stage 20?” the Vuelta organisers asked themselves. They therefore resolved to try and answer that question once and for all.

Say lads, why not try and skitter up this with three weeks of racing in your legs. 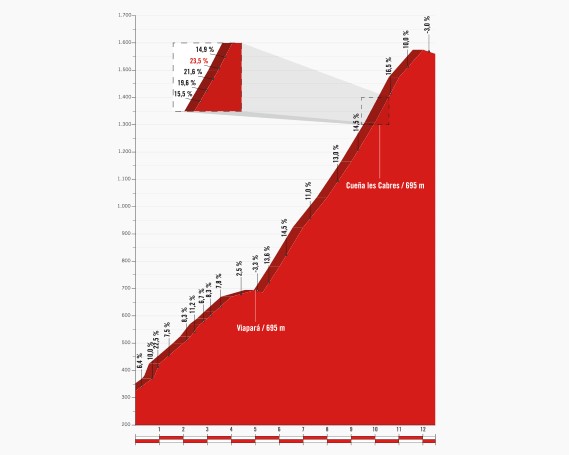 Ordinarily Grand Tours are exercises in whittling away names until you’re left with just one. On this occasion, we were left with two. Chris Froome became champion after being able to accelerate at the moment Vincenzo Nibali decelerated a couple of kilometres from the summit. Alberto Contador was the people’s champion, because of everything.

The Spaniard went out in style. He didn’t wait until people were flagging near the top. He didn’t sit behind other riders. He did what he’s been doing all race. He attacked at the bottom and he rode the climb alone.

At one point breakaway rider Marc Soler tried to keep pace with him. Here’s how that went.

Contador lost several minutes in the first week and I for one am glad, because it probably encouraged him to ride like this more than he otherwise would have done.

He may have only finished fifth overall, but people will remember his performance and this stage win far more than the races of Zakarin, Kelderman and Nibali, who all finished above him.

As much as cycling is about who’s fastest, it is also about pondering what might happen; wondering who might crack and who might somehow steal minutes with an audacious and unexpected move.

Chris Froome was fastest. Alberto Contador was something else. 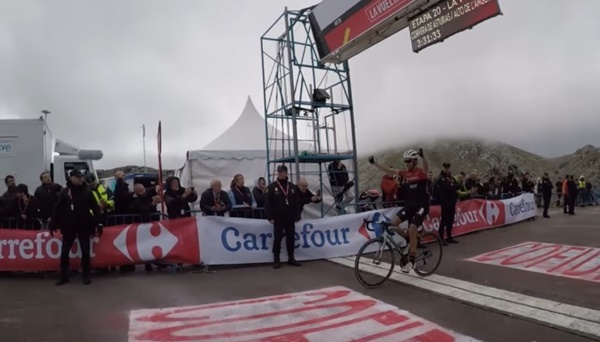 The old procession-and-then-a-sprint, so basically just loads of celebratory bollocks. 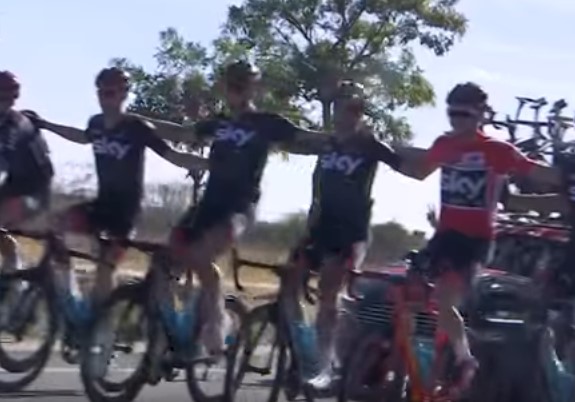 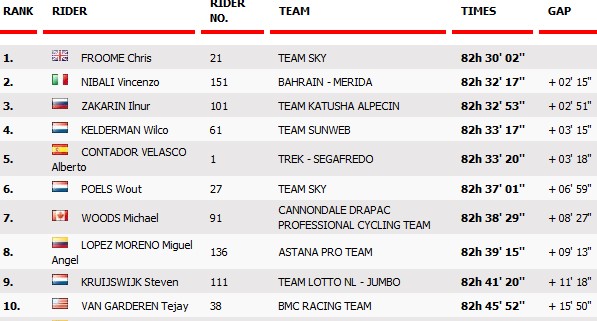 Up until now, no-one had ever won the Vuelta having already won the Tour earlier in the same season.

I don’t think it’ll get any better than this for Chris Froome.

The World Championships a week on Saturday. Can Peter Sagan make it three on the bounce? Don’t expect a prompt report on this one as I’ll be away.

Other than that, the main thing to look forward to is Froome lining up against Giro d’Italia winner Tom Dumoulin in the Tour de France next year. The Dutchman is one of very few who can claim to be a superior time trialist, which will add a very different dimension to the battle for the overall.