The Rest Day Wrap is an attempt to give an overview of where things stand in the Vuelta a Espana. It focuses on the general classification – which is the overall race – rather than stage wins.

The final descent was so relentlessly twisty-turny that it was actually rather mesmerising – so mesmerising, in fact, that the first time I tried to watch it, I fell asleep.

A second viewing revealed that Nicolas Roche had become the first overall contender to claw back time on Chris Froome. Vincenzo Nibali, a famed descender, had tried his luck but had been hauled in, whereupon Roche made a more successful attempt and gained 29 seconds on everyone.

In classic Roche tradition, he achieved this while evading all cameras.

It seemed hairy. Roche said he locked up his back wheel trying to go on the inside of Froome on one of the hairpins and almost came down. He then added matter-of-factly, “that happened to me a few times.”

These men are all fully mental. 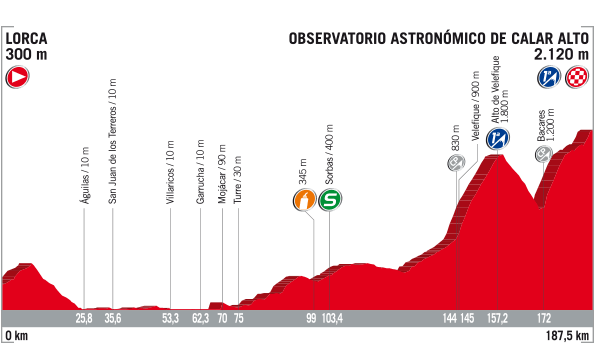 Roche was briefly level on time with Esteban Chaves in second. But then he wasn’t.

The longer climbs weren’t kind to the Irishman and he lost four minutes. They weren’t great for Chaves either. He lost two.

It was interesting to see how longer efforts brought different riders to the fore. Miguel Angel Lopez won the stage, for example (simply riding away from everyone like it was no big thang) while Vincenzo Nibali reminded everyone that he prefers these steadier more protracted efforts by finishing third.

The Sicilian prefers longer races too and that plus the relative freshness of not having ridden the Tour de France could see him really come to the fore in the final week. 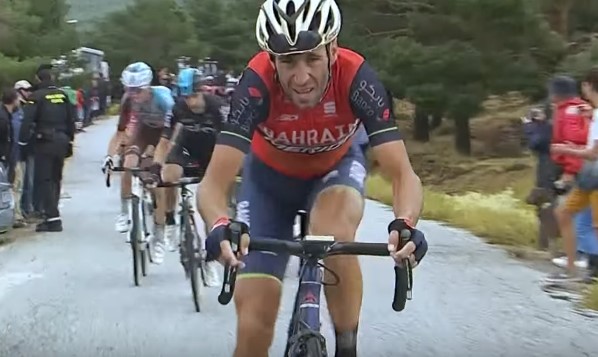 He’s not the main man yet though. Short climbs or long climbs, Chris Froome doesn’t care. He came second.

Everyone else handed over seconds or minutes. Alberto Contador and Ilnur Zakarin were just 15 seconds behind Froome and Nibali, who finished together. Fabio Aru lost a minute. Tejay Van Garderen lost three minutes and whichever Yates had been doing best lost either nine minutes or 17 minutes – it doesn’t really seem worth checking which because he’s out of consideration either way.

In fact a lot of people are. I reckon the cast is arguably down to Froome and Nibali, although on the basis that they could succumb to fatigue and a crash respectively, it’s worth pointing out that there’s a great slew of riders 2m30s to three minutes behind.

Contador appears to have gone through the Vuelta road book and earmarked all the least promising climbs for attacks.

There was plenty of road after the last climb of the stage, but the Spaniard reprised his stage six trick anyway, riding away in the assumption that his rivals behind would swiftly run out of team-mates.

Froome responded to the stress by falling off his bike. He quickly called for a replacement and then immediately fell off that one too. 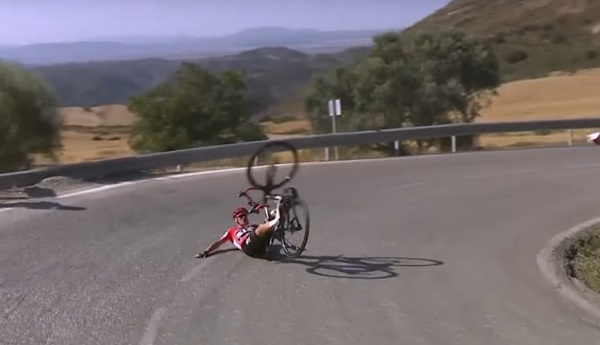 So in the closing kilometres we had everyone chasing Contador (who was being aided by a helpful team-mate who’d been in the break) and Froome (plus team-mates) chasing everyone.

Everyone ceded 22 seconds to Contador but gained 20 on Froome.

“Froome is still Froome,” was Vincenzo Nibali’s unarguable and unnecessary verdict at the finish.

Shades of the Tour de France with Thomas de Gendt in the break for the whole day to no great effect.

Nothing else to report. 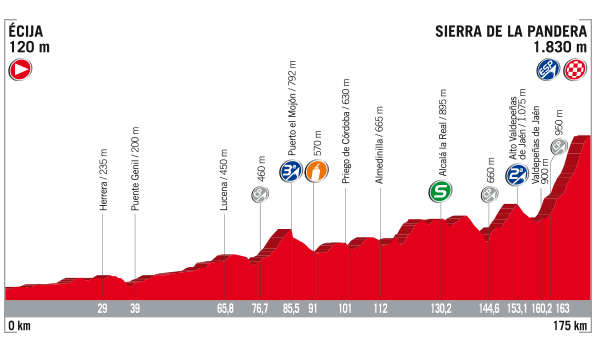 Duelling. That’s how I’d describe the final climb of this stage. Duelling with hangers-on.

Nibali, with Contador in tow, rode much of it five seconds ahead of Froome. As gaps go, it was small, but the fact there was a gap at all seemed meaningful for all that will follow in the rest of this race.

Froome set his men to chase the Sicilian down and when he ran out of men, he moved forwards himself. When Nibali saw Froome getting close, he accelerated again.

One second, five seconds, a minute – Nibali didn’t give a shit. All he cared about was that there was some sort of gap; a little bit of tarmac that said “I am now better than you (and there’s still a week to go)”.

Tarmac can be surprisingly communicative.

It didn’t last. Froome, leading a few lower profile rivals, shrank the gap and upon making contact presumably did some sort of alpha male passive aggressive head nod at Nibali. I didn’t see one – I’m just assuming. Maybe he should have been watching Miguel Angel Lopez though, who rode off again.

The Colombian gained all of four seconds from his efforts. Froome, Nibali and Contador all finished on the same time, together with Ilnur Zakarin and Wilco Kelderman, whose cloak of invisibility remains intact. (He’s been doing excellently, but well done if you’ve spotted him at any point.) 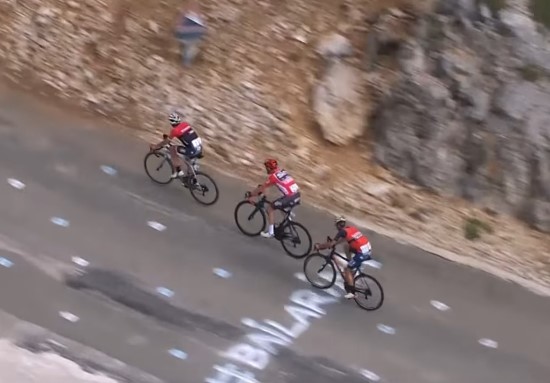 Condator, Froome and Nibali in their distinctive jerseys (via YouTube)

Now I don’t officially mention stage winners in these round-ups, but I have to on this occasion because Rafal Majka was presented with what looked like some autumnal bonsai. 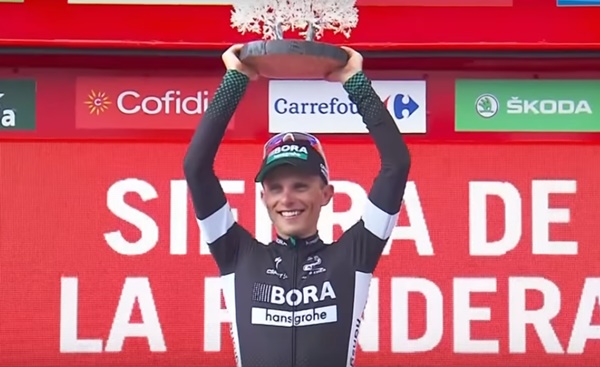 Nibali had a bit of a go, Contador had a longer go, but neither came to anything in the end. In fact both riders paid for their efforts – Nibali a little, Contador slightly more.

Miguel Angel Lopez, however – no-one’s matching him in the mountains at the minute. He launched his move at the same time as Contador, but eased away from the Spaniard as soon as the mood took him.

He soon caught up with a Yates at the head of the race. The Yates knew he was coming, held something in reserve and tried to glue himself to the Colombian’s wheel. The glue was some kind of cheapo Pritt-Stick, however, because he lasted all of 50m before pretty much bursting.

Lopez rode on and won his second stage of the week.

Ilnur Zakarin also nicked a bit of time. He finished second and displaced Wilco Kelderman in third place overall, while Chris Froome did nothing spectacular, but didn’t break.

Should probably go tabular at this point, rather than raining time gaps down on you expecting you to hold it all in your head. 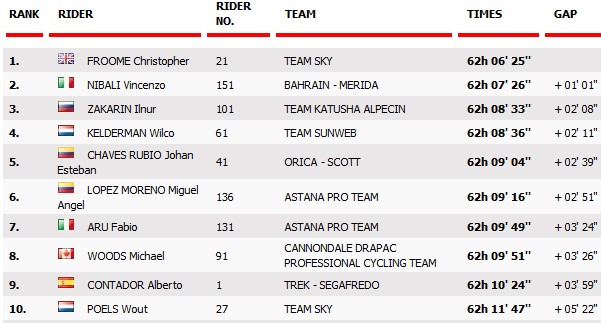 Meet you back here this time next week for a review of the final week.

Oh and please forward this email to someone and yadda yadda yadda. You know the drill.