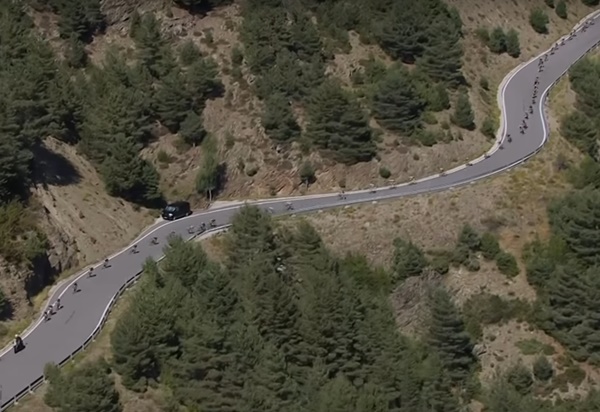 The Rest Day Wrap is an attempt to give an overview of where things stand in the Vuelta a Espana. It focuses on the general classification – which is the overall race – rather than stage wins.

You can hang around for a fortnight and not see the major contenders separated during the Tour de France. The Vuelta a Espana, by contrast, has been doling out time gaps pretty much daily. If you wanted to know the difference between the two races, that’s it right there.

A team time trial. These are largely about damage limitation and Romain Bardet and his AG2R amigos sustained the most.

The second day brought abanicos (echelons). Julian Alaphillippe did the damage with just 3km to go. When a gap opens in crosswinds, it generally doesn’t close and that one effort from the Frenchman resulted in a host of time gaps at the finish. Just four or five seconds at a time, but it all adds up. Bardet was again among the most affected. 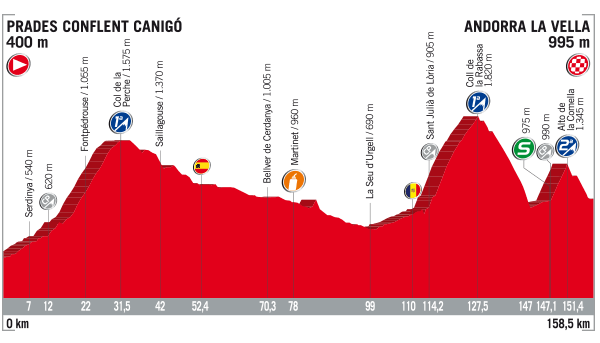 Mountains already, because that’s how they do things in Spain.

Sky upped the pace on the final climb and thinned the peloton to the bare essentials. The move was most notable for the fact that Alberto Contador was among those binned.

After his team had made everyone miserable, Chris Froome attacked near the summit and the upshot was that the main contenders seemed to go over the top in pairs.

The downhill saw a few of them join up again and by the finish, there were nine riders in the front group. Vincenzo Nibali won the sprint and The Shark of Messina celebrated with a shark’s fin mime that brought to mind nothing if not Lindsay’s chicken dance from Arrested Development. 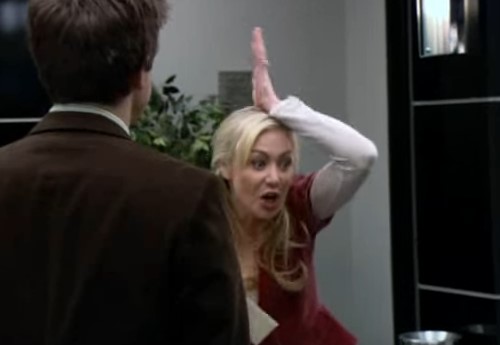 Behind him, gaps were large enough that we can trim a few people from our cast list of major players while also paying far less attention to a few others. This is always a relief. With so many riders in with a shot of winning, covering these early stages can be a logistical nightmare for a weekly round-up writer.

So let’s list some time gaps and you can decide for yourself how meaningful they are.

As for the victor, it’s worth noting that Nibali had been dropped by Froome, Esteban Chaves and others on the climb. This is a race with far more than its fair share of uphill finishes, so that’s probably not something to gloss over.

The least interesting day of the week, but it still brought meaningful action. Domenico Pozzovivo crashed about 100m from the 3km to go mark – the point at which he’d have been given the same time as the stage winner following such an incident – and lost 3m25s.

Rafal Majka finished even further back and so joined Jungels and Alaphilippe in being considered unequivocally out of contention. 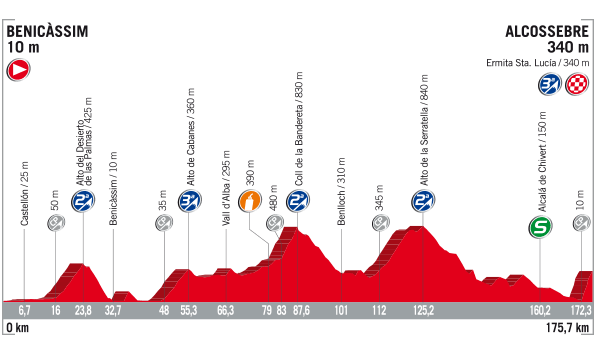 Let’s stop listing everyone who didn’t finish in the first group of favourites across the line and instead list those who did.

It was a classic Vuelta finish, 2km at a crazy per cent gradient, and four riders did better than their rivals. These were Chris Froome and Esteban Chaves (unsurprisingly), Alberto Contador (heart-warmingly, given how things had been looking a day or so ago) and Canadian former middle distance runner Michael Woods.

Vincenzo Nibali was not among them, as foreshadowed a few paragraphs ago.

Contador again. This is why he’ll be missed.

It was a long downhill to the finish and as everyone chewed over their plans and apportioned their energy on the climb that preceded it, the Spaniard decided to elongate the bunch until you could no longer see the joins. 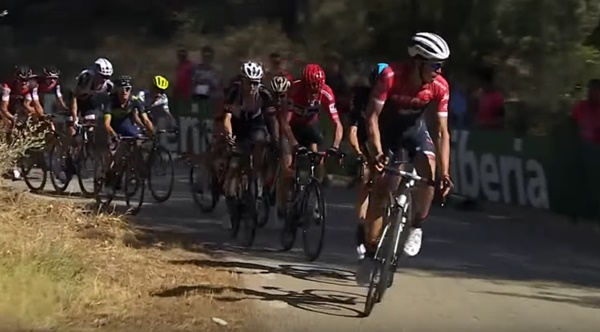 Was it calculated or did he just want to see what happened? Who knows? But within a couple of kilometres he ditched almost everyone which probably indicates he’s good on shorter, harder efforts at the minute.

The summit came 30km from the finish though, so it was largely for nought. There were a few seconds here and there plus one big casualty in Romain Bardet. He lost six minutes and is struck from that cast list of ours with a flourish.

The stage profile seemed interesting enough, but oddly nothing came of it. Even the Vuelta can’t deliver every time.

The big news was Jetse Bol pole vaulting into the top ten after being part of a break that finished eight minutes before everyone else. It was only ever going to be a cameo appearance though. 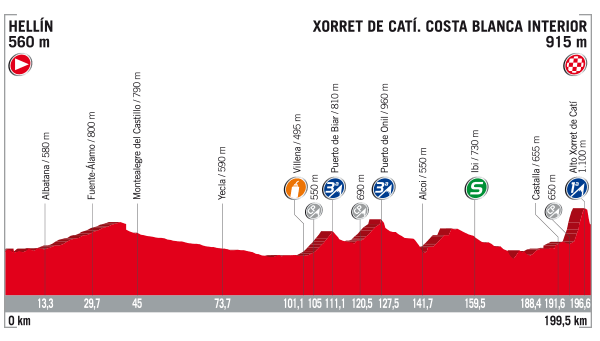 Bye bye Jetse Bol, because of that great slab of double digit gradient road near the finish. 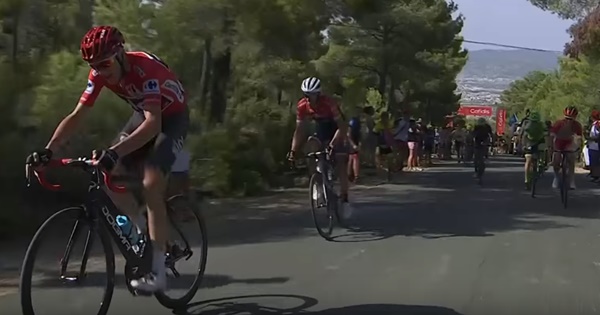 Only Alberto Contador could stay near him. The Spaniard must be cursing that day he had the shits because he’d be right up there based on his form since then.

Those two finished 17 seconds ahead of the other fellas.

Chris Froome won the Tour de France without winning any stages, but with no successful breakaway on this stage, he’s on the board in the Vuelta.

Chaves and Woods almost stayed with him on the climb to the line, but he just kept on gnarling along, refusing to let anyone pass him.

Jaws will remain immobile at the four second winning margin, but day after day he is proving himself slightly superior – and it’s not always the same rider in second place.

In cast-trimming news, Simon Yates lost ten minutes on this stage, so we’ve halved the number of Yateses we have to keep an eye on.

So where does that leave us going into the middle week of the race?

The time gaps are surprisingly small and Nicolas Roche is in third even though I literally hadn’t mentioned him until this sentence. 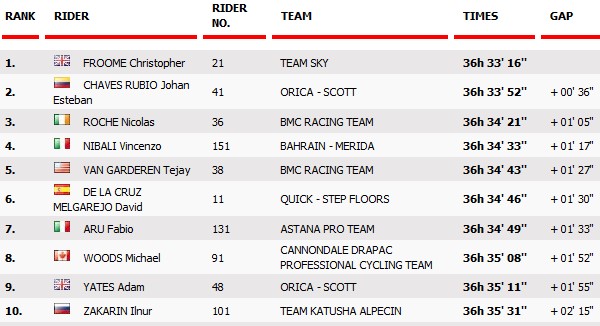 If you feel like the Vuelta’s all but decided – it really isn’t. All riders tire, particularly those who rode a three-week race only a few weeks ago. We’ve also been hitting the shorter climbs a lot so far and if that’s very much the pan y mantequilla of the Vuelta, far longer climbs await on which time gaps could be sizeable-to-whopping.

Looking ahead, there’s a frightening amount of general classification racing in this second week, let alone the final one.

In coming days, pay particular attention to stage 11 on Wednesday, which features a pair of 15km climbs, the second of which provides a summit finish; stage 14 on Saturday finishes with a similar sort of slope; while stage 15 on Sunday is yet another summit finish, but this time with about 20-odd kilometres of climbing to the line.

I’ll update you again in a week’s time. Until then, I’ve the usual favour to ask: please persuade at least one person to sign up for the email.