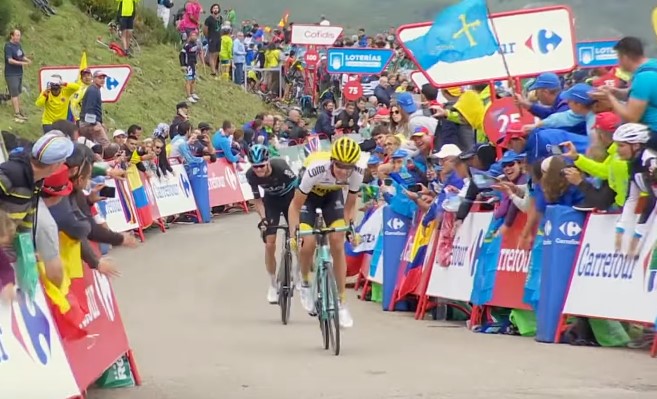 If there’s one thing the Vuelta a Espana is known for, it’s throwing a hill in at the end of a stage. Flat day or mountain day, they tend to find one.

There may be a long time trial in this year’s race (and a team trial to start) but it’s the uphill finishes that matter most. Here are a few riders to look out for.

The Tour de France winner generally finishes second in the Vuelta. It’s happened three times and he’s getting a bit sick of it.

Weirdly, the Frenchman’s never before ridden a grand tour other than the Tour de France. You’d imagine the Vuelta will suit him better.

The Sicilian was a bit limp in this year’s Giro d’Italia by his own lofty standards and finished third. He’ll probably want to win a grand tour this season.

The most successful grand tour rider who’s still active will be riding his final three-week race in his home country. Whatever form he’s in, he’ll be worth watching.

We all know the two lads from Bury, Adam and Simon Yates. We can’t always tell them apart, but we know them. There’s an added challenge in this race as this will be the first grand tour they’ve ridden together. Expect commentators to play it safe and talk about “the Yateses” a lot of the time, rather than throwing caution to the wind and risking a first name.

Ground his way to fifth in this year’s Giro despite riding with far too much hanging round his neck. (If he fancies himself as a Mr T lookalike, someone should tell him he lacks most of the key ingredients.) The Stork of Tatarstan has built the second half of his season around doing well in the Vuelta and might well manage it.

The 2015 Vuelta champion finished fifth in this year’s Tour and looked shagged out by the end, but will probably find the terrain here more to his liking.

Let’s fire out a few other names who aren’t likely to win but who may well pad out the top ten.

Esteban Chaves is the third prong of the rather frightening Orica-Scott fork, along with the Yates boys.

Miguel Ángel López (Astana) is young and highly regarded but has never yet completed a grand tour.

Wout Poels (Sky) is a bit of a dark horse.

Julian Alaphilippe (Quick-Step Floors) is an even darker and even more interesting horse.

This wouldn’t ordinarily news, but he had actually planned on sitting out the Vuelta and only got a late call-up following injury to a team-mate. Hansen has completed 18 grand tours in a row. No-one else has ever done more than 12.

Can he make it 19? It’ll be a real challenge. He hasn’t been training much due to a saddle sore. No part of that previous sentence will help his cause.

More than either of the other grand tours, the Vuelta likes to keep the main contenders active. The climbing starts on stage three on Monday and there’s an uphill finish to stage five on Wednesday.

Saturday’s another uphill finish, supposedly tipping up to 20% at one point, and I can say exactly the same thing about Sunday’s stage too. I’ll then hopefully check in with you all on Monday for a bit of a recap.

Have fun and, as ever, tell someone or other – anyone really – to sign up for the email.