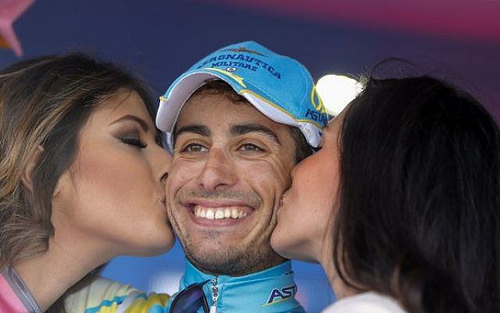 Like an enthusiastic but incompetent charades player, this year’s Giro keeps you guessing. A day after I suggested that Fabio Aru might be fading, he gains the maglia rosa.

It didn’t have much to do with fitness or performance, mind. On a flat stage, a late crash brought down or held up several of the overall contenders. Aru and Rigoberto Uran were the right side of it and sailed through to the finish. Alberto Contador went down, pretty much bounced back up again and then claimed a bike off team-mate Matteo Tosatto who had strode through the melee with his carbon fibre steed on his shoulder. He lost 30-odd seconds.

Richie Porte, in contrast, eventually took a bike off Vasil Kiryienka, who’s way bigger than him and therefore rides a way bigger bike, but he took his time about it and lost another two minutes.

Italian, Sacha Modolo, who’s one of those sprinters about whom I don’t really have much to say. This is his fifth Giro and his first stage win, which perhaps explains my lack of strong feelings.

The time trial which has been looming over this race ever since it began. 59.4km. Half flat. Half not. The time gaps could be enormous.