Geraint Thomas is strong enough for everything except the wind 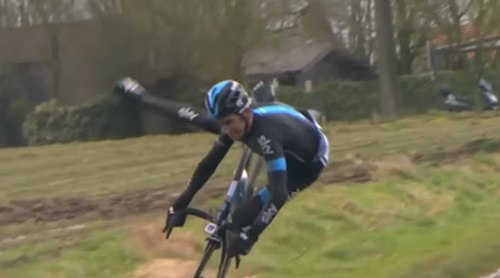 In my previous ‘what’s next?’ I neglected to mention E3 Harelbeke which took place on Friday. It’s the same class of race as Gent-Wevelgem and makes the list. It was just lazy calendar reading on my part. Sorry about that.

The race named after a motorway that has since been renamed and that also isn’t used had a British winner in Geraint Thomas. The man who I was strongly considering nicknaming ‘Two Stools’ for his ability to fall between stage racing and classics, finally seems to have sat on one. Considering he was fifth in Paris-Nice, I guess he’s also got his feet up on the other one.

As for how he managed this particular win, one of the crucial details passed me by thanks to Eurosport’s somewhat idiosyncratic coverage. I was watching the highlights and before the ad break one bunch of riders was two minutes ahead of the peloton. Afterwards, three entirely different riders were 30 seconds clear. To be honest, this wasn’t actually all that bad a result considering how Eurosport bounce things around their schedules. Normally when you try and record bike race highlights, you find yourself fast forwarding through three hours of biathlon.

Anyway, the three-man break comprised Thomas, Zdenek Stybar and Peter Sagan, all big strong classics riders and all of whom you should know. In the same race last year, Sagan outsprinted Thomas for the win, so this year the Welshman didn’t give him the chance. He attacked with about 4km to go and it quickly became apparent that the Slovak had no hope of following. Stybar was a bit more lively, but still had less in the tank than Thomas and couldn’t reel him in. It was a very, very good ride and the biggest road race win of Thomas’s career.

The race named after a town from which it doesn’t actually begin did not have a British winner. Thomas did however come third. He also looked really good in Milan-San Remo earlier in the month, so if he can stay on his bike, don’t rule out more big wins this spring.

I say ‘if he can stay on his bike’ but he didn’t actually manage it in Gent-Wevelgem and still got a decent result. However, he wasn’t alone. I think pretty much everybody fell at some point or other. Only 39 riders finished.

It was a proper Belgian classic; a brutal race where the riders were battered by extraordinary winds. Take a look at this video of Thomas’s crash for an example of what I mean.

There was another video I could have used with English commentary, but I feel it’s important to really embrace the Belgian nature of these races. Also, Flemish sounds funny.

As I said, Thomas wasn’t alone in falling. The eventual winner, Luca Paolini, fell twice and at one point had to change his bike.

Paolini has a decent pedigree in the classics, but at 38 I thought he was maybe past winning any more. These days his primary role appears to be as the vehicle which tows Alexander Kristoff about. In any tough race, towards the end there will be a period when Paolini is single-handedly reeling in a break or pushing the pace with Kristoff tucked in behind him.

It’s good that he secured a victory for the middle-aged. I ascribe his success to his magnificent beard, which doubtless helped preserve his energy while others were suffering wind chill.

The Tour of Flanders is on Sunday. It’s a really, really fun race with steep hills, cobbles, quite possibly wind, and thousands of pissed-up Belgians shouting at the side of the road.