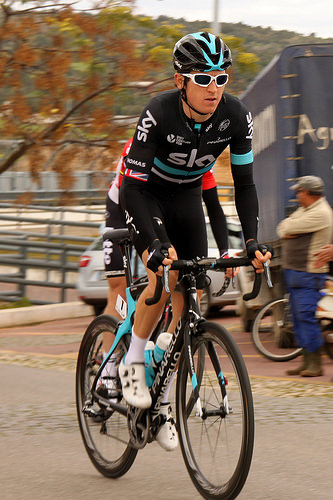 Without wishing to dumb down too much, cycling is to a great extent about tiredness. Tiredness is what makes a three-week Grand Tour different from three one-week races with gaps in between.

Geraint Thomas won Paris-Nice by the colossal margin of four seconds. He was 11 seconds faster than second-placed Alberto Contador in the prologue and gained another four seconds, partly thanks to a time bonus, after finishing second on the stage six summit finish. He then spent the majority of stage seven responding to Contador attacks.

This is always the way when Contador’s second late on in a race. You’d almost be tempted to let him win just so you wouldn’t have to put up with his behaviour.

The Spaniard got into a breakaway group with about 50km to go and when that was reeled in, attacked again on the final climb. And again. And again. Eventually Thomas could take no more, but fortunately for him, there was still a descent to come and after barrelling downhill like a good ‘un, he got within sight of Contador, which turned out to be good enough.

It’s an impressive win – the first WorldTour stage race victory of Thomas’s career – but you do wonder how a notional stage nine would have gone. There were echoes of last month’s Tour of the Algarve where Thomas won the overall, but Contador won the final mountain stage. There’s a reason why Contador has won almost every three-week race he’s ever entered but has never won a major one-day race – his greatest strength seemingly lies in being less susceptible to tiredness than his rivals.

Steve Cummings won stage four of Tirreno-Adriatico, the race which despite overlapping with Paris-Nice is also part of the WorldTour. He did it in classic Steve Cummings style – by riding faster than everyone else.

That’s a pretty stupid description of his modus operandi, but most winners tend to do their going faster at fairly obviously sensible moments, such as on a mountain pass, up a hill or in a sprint. Cummings just cycles past everyone on the flat, which isn’t really how bike racing is supposed to go, what with it being easier to cycle behind someone else and all.

It worked because he’d got into a late break and then been a lazy sod and not helped out. His team, Dimension Data, were hoping for a sprint finish for Edvald Boasson Hagen so Cummings was just sitting there seeing if the break managed to stay away or not. He didn’t much care if it didn’t. Or at least he didn’t until 3.5km to go, at which point he rode off, never to be seen again.

Here’s a video of him being slightly less tired than everyone else.