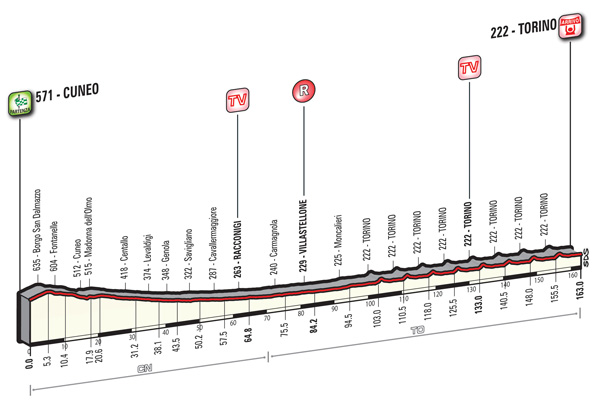 Quite a neat trick, really. After nine second places and four third places, Giacomo Nizzolo finally crossed the line before everyone else in a stage of the Giro d’Italia. Shortly afterwards the race judges concluded that he’d veered across while sprinting and in so doing had blocked off his rival, Sacha Modolo. They demoted him and made second-placed finisher Nikias Arndt the winner. So it goes.

“Staying on your bike is also cycling”

That’s a quote from Steven Kruijswijk who lost the Giro when he failed to do that on stage 19. It’s an admirably phlegmatic view, but accurate.

Vincenzo Nibali earns a few ‘true champion’ points for his performance this year. He was in the mix but behind up until the cronoscalata when it all went horribly wrong. As well as the mechanical and wonky bike change, he was also apparently suffering from “some intestinal problems” that day. It’s probably safe to assume he wasn’t fully recovered by stage 16 when he again lost time.

The high mountains were Nibali’s saviour though. When the race finally hit the tallest peaks, he seemed the least troubled by altitude and if he didn’t look obviously dominant, it did allow him to apply pressure. Kruijswijk cycled wearily and carelessly on a descent and Esteban Chaves slowly ran out of zest.

There was something of the Alberto Contadors in the way Nibali took this race. It was as much about his refusal to be beaten as his physical ability. The latter is of course an entry requirement if you want to compete for a Grand Tour, but it is not enough in itself.