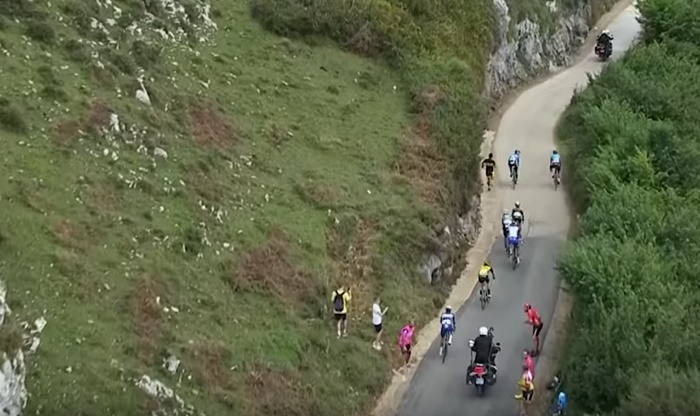 My second week recap (which technically also includes one stage from the first week) is a tale of two breaks and three summit finishes. 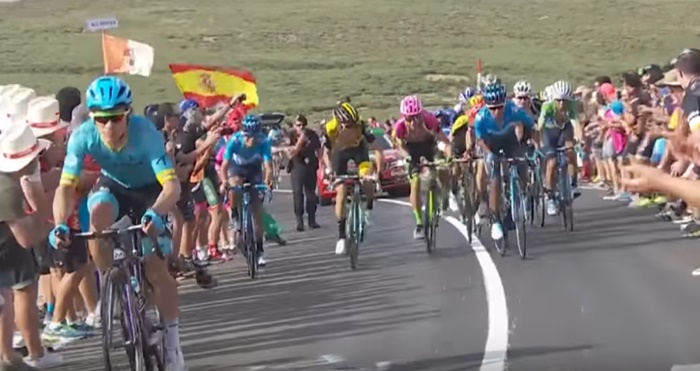 Stage nine brought the first proper mountaintop finish of the race and therefore brushed away all the irrelevant detritus that’s been clogging up the overall standings. Unusually, this included everyone from Team Sky.

Long before the finish there was no Sky rider in the front group. This is a very unusual development, but not particularly surprising. They came into the race with no ‘oh that’s the guy who’ll probably win‘ leader and instead seemed content to casually throw a few random darts over their shoulder in the vague hope that they might just fluke a bullseye.

David De La Cruz finished about a minute back on the favourites, which seems about right, while Michal Kwiatkowski lost two minutes. After four Grand Tour victories in a row (last year’s Tour and Vuelta and then the Giro for Chris Froome and this year’s Tour for Geraint Thomas) Sky aren’t going to win this one.

Other than that, the time gaps were fairly small – although Alejandro Valverde lost about 20 seconds. This was significant because race leader Rudy Molard plummeted down the standings like a lead turd and left a vacancy. Simon Yates (Syates) stepped into it with a titanic one second advantage over his Spanish rival. 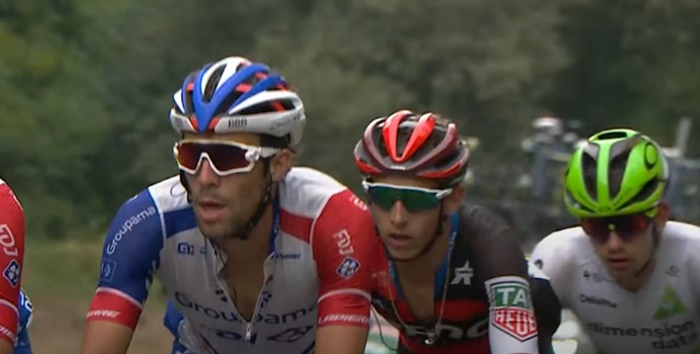 They cracked along at almost 50km/h in the first hour of stage 11. Impressive enough even if there hadn’t been a climb. Which there was.

The frenetic start left everyone battered and this meant that a 19-man break managed to get away. It had Thibaut Pinot in it, which was bad news for everyone because it guaranteed the peloton would try and chase them down.

So for 200km everyone rode really hard and at the end of it, Pinot had recouped all of 12 seconds of his crosswind-induced week one time loss. It’s fair to say it took way more than 12 seconds worth of effort out of him. Getting in the break was, with hindsight, a colossal waste of time.

Another day, another big break – but the one on stage 12 had more impact. Vincenzo Nibali was the big name in there, but Jesus Herrada was the best-placed rider overall and the group got so far ahead that he actually took over the race lead.

Herrada’s a strong rider, but the overall contenders clearly weren’t scared of him otherwise they’d have made more effort to chase. He finished the day with a seemingly-whopping three minute lead over Syates but had lost it all and plenty more by the end of stage 14.

It was a bit like briefly perching yourself behind the wheel of a Ferrari in an upmarket car showroom. You get a feel for what it’s like, but you don’t belong there. You belong in your 2005 Renault Clio.

First of the triptych 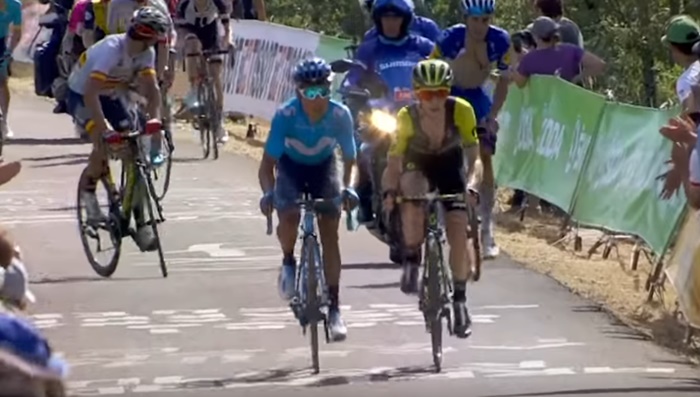 You don’t often get the chance to throw words like ‘triptych’ about, but with three summit finishes in a row, let’s loosen our belts and enjoy ourselves.

Stage 13’s was La Camperona, which is 8km long and hits 20% at times – the kind of gradient in which the Vuelta has all but cornered the market.

Herrada held onto the race lead, but struggled, losing 1m50s of his advantage. Nairo Quintana and Syates opened up a small gap on the rest. Emmanuel Buchmann and Fabio Aru lost near enough a minute and we can probably forget about them.

Middle summit finish of the triptych 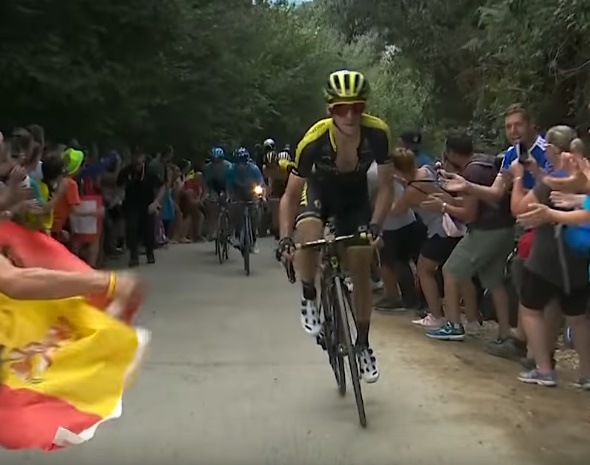 Stage 14’s was 4km at 12.5% on a shitty surface that looked like bare concrete strewn with gravel. I imagine it was monumentally irritating to cycle on.

Syates won the stage and regained the overall lead, but he only finished two seconds ahead of Miguel Angel Lopez and Alejandro Valverde. Pinot was 5s back and Quintana 2s behind him. It was, in short, nowhere near as meaningful a stage as one might have expected.

Everything was basically set for the riders to give it everything on the big finish before the second rest day.

Final summit finish of the triptych

Stage 15 ended with the Lagos de Covadonga, which is significantly longer than its siblings that preceded it. To say it’s 12km at 7.2% doesn’t really explain it properly because there are flat bits and descents knackering up that average.

In the end, the time gaps were… unremarkable. Thibaut Pinot was either the fastest of the favourites or the least necessary to chase (it was quite hard to tell which). He finished 28s ahead of everyone else and after that, it was two seconds here or there separating the six riders who seem to be a notch above everyone else.

These are the standings on the second rest day. And yes, I absolutely am giving you a top seven. What of it?

A time trial on Tuesday and then more hills and mountains. Come on, you must have an idea what the Vuelta’s about by now.