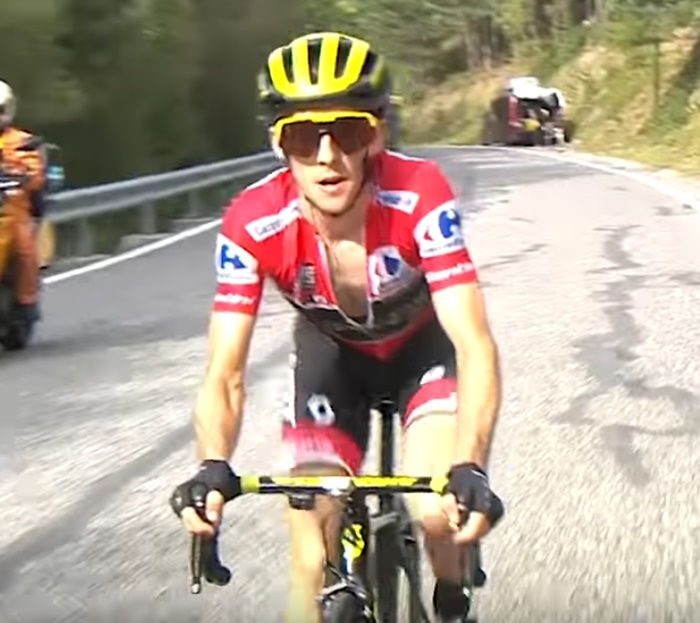 Earlier this year, in the closing stages of the Giro d’Italia, Simon Yates collapsed like your granny after half a bottle of gin. Fortunately, fears that gin might strike twice proved unfounded and he held it together to win the Vuelta a Espana.

The victory gave Britain a full house of Grand Tours this year after Chris Froome’s Giro win and Geraint Thomas’s victory in the Tour de France. This is either a great source of national pride or just an interesting thing, depending how ferociously patriotic you are. (Personally, while I’m happy for all three riders, I err towards ‘interesting thing’.) 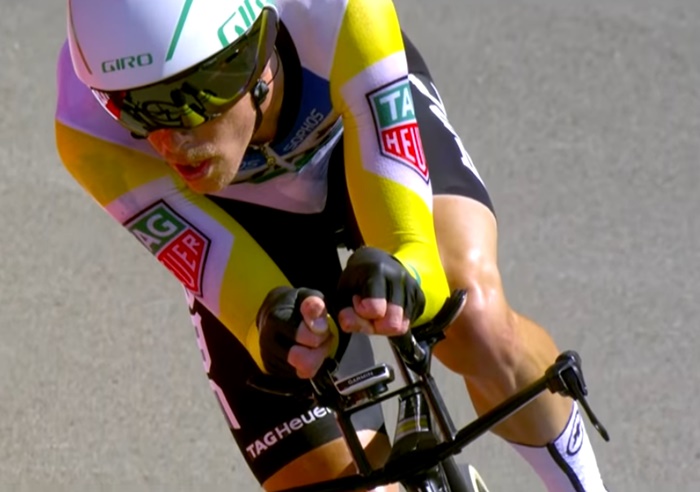 Rohan Dennis won stage 16 by a mile and then basically just carried on going, all the way back to his house for a bit of rest ahead of the world championships. For him, it was a two-week race, bookended by time trial wins.

The big winners out of the overall contenders were the subeditor’s recurring nightmare, Steven Kruiswijk, and Enric Mas. The former moved up two places to third and the latter up one spot to fifth. The Colombians Nairo Quintana and Miguel Angel Lopez went the opposite way.

Simon Yates (Syates) retained the overall lead. This is exactly what happened in the third week of the Giro d’Italia earlier this year but everyone was well aware that his efforts then took an invisible toll. He’d made so much effort then that he crumpled like discarded laundry on the next two mountain stages. Would that happen again? 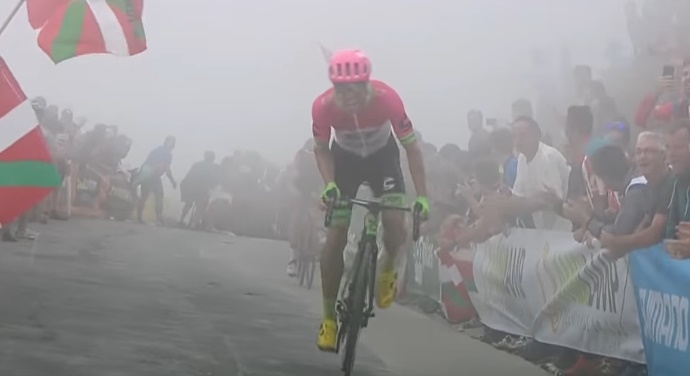 Most of the Vuelta is run on immaculate asphalt that’s vaguely horizontal but they don’t half love a shitty concrete track that pitches up to ridiculous gradients for their stage finishes.

Stage 17’s Alto Balcon was as bad a climb as any. The race progressed in this weird slow motion where 800m to go meant ample time for at least four different attacks before the finish.

The stage winner was Michael Woods, a Canadian former middle-distance runner who appeared to be screaming for the whole of the last 500m. He dedicated the win to his stillborn son.

A recurring imagine of the Vuelta from year to year is Alejandro Valverde skittering up an impossible ramp at an impossible speed. I’ll always imagine him doing it alongside Joaquim Rodriguez, but while Purito’s retired, Valverde endures. He’s 38 now but he was still the quickest of the overall contenders – albeit Enric Mas finished alongside him.

Crucially, Syates was only 4s behind, so presumably the time trial didn’t drain him of all his energy on this occasion. This must have been a delightful surprise for the lad.

Kruijswijk’s time in a podium position was brief – he lost a minute. Nairo Quintana finished on the same time and by this point it was hard to view the race as anything other than Syates v Valverde.

Stage 18 was fun but irrelevant

There were three lads in the break and the furthest they got ahead was three minutes, which is nothing on a flat stage. Nevertheless they ploughed on – against all reason – and did well enough that this was the situation with about 950m to go. 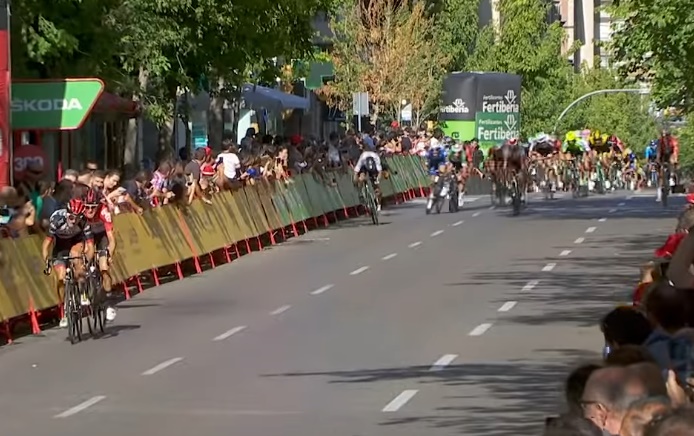 And this was the situation with 50m to go.

They held on! By about a metre!

Jelle Wallays won, but a nod too for Sven Bystrom who was second. They were barely a bike length ahead of Peter Sagan and the rest of the closing peloton. It was hugely entertaining.

Stage 19 saw everyone riding on the flat for the entire day before spending 18km climbing to the finish line. It wasn’t as steep as a typical Vuelta climb though – the harder bit was in the first half and then after that the gradient was moderate.

For a while, everyone took it in turns to move from the peloton to a growing front group that was just 50m ahead. First Nairo Quintana went, then team-mates George Bennett and Steven Kruijswijk, then Thibaut Pinot, then Syates.

But that was as big as the group got. Bennett was on team duty and duly exhausted himself, at which point Syates moved to the front because by now he didn’t really care about anyone other than Valverde and Valverde was in the group behind. It was the right move because the gap grew and Quintana was forced to drop back and help his team leader. The Colombian then almost immediately got a puncture, which made that decision rather pointless.

And really that was the scenario all the way to the top. Syates pushed on and Valverde followed not-quite-as-quickly while various other people shimmied about between them, attacking or becoming exhausted, or more frequently one and then the other.

Near the finish, it was just Syates and Pinot and the Frenchman did the obvious thing and nipped round to take the stage win. Kruijswijk was a little further back and moved up to third overall.

The only thing that really mattered however was the gap between Syates and Valverde. It was 1m07s which effectively gave the Briton a 1m38s head start for the final mountain stage. It was way more than enough.

Last of the proper racing

There are never time gaps on the final stage, so stage 20 decided the race. The route was as intense as they come – 97km with almost 4,000m of vertical gain.

If those numbers don’t mean much to you, think of it like this: if the route was uphill from start to finish, the average gradient would be over 4%, which is about the same as “the Surrey Alp,” Box Hill (only for about 25 times the distance). Only the stage wasn’t uphill all the way. There were no fewer than six climbs, each of which was about 8%.

Thomas De Gendt got in the break again. 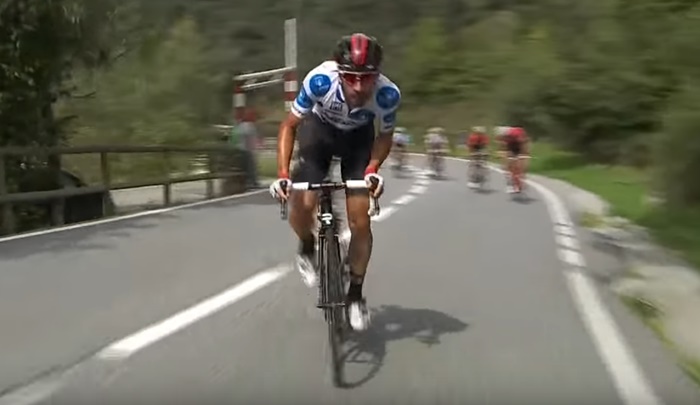 He actually went up the road on about a third of the stages of this race – just as he does in pretty much every Grand Tour he rides. It’s an insane undertaking with the insanity compounded by the Belgian’s at times unsophisticated approach to tactics (‘I know, I’ll try riding really hard and see if I drop everyone’). On this occasion, his efforts were enough to secure the mountains classification, which is no less than he deserves.

On the penultimate climb, Syates thought to hell with it and attacked the front group. Might as well defend from the front, eh? Enric Mas and Miguel Angel Lopez first went with him and then pretty soon dropped him. Alejandro Valverde, tucked into a larger group behind, gave chase.

Actually ‘chase’ might not be quite the right word, because pretty soon Valverde cracked like an inexpertly-drilled bathroom tile. As the climb dragged on, he found he was no longer second overall, shooting for first – by the time he reached the finish, he’d fallen to fifth.

Syates plugged away, finished third and won the Vuelta. Mas took the stage and moved up to second (a very good result from a young rider). Lopez was second on the day and finished third overall. 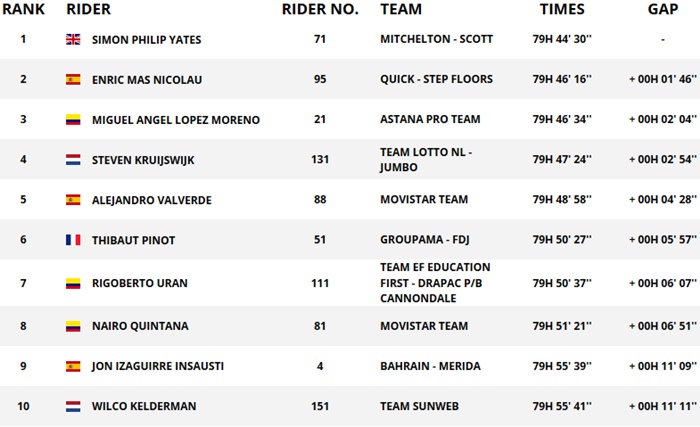 Well, technically the final stage, which will be a sprint that someone will win. After that it’s the World Championships from September 23-30.

This year they take place in Austria on a route that’s predictably chock full of climbing and with a truly ferocious slope near the finish. Syates has a decent chance.