Who’s the fastest climber in the peloton? 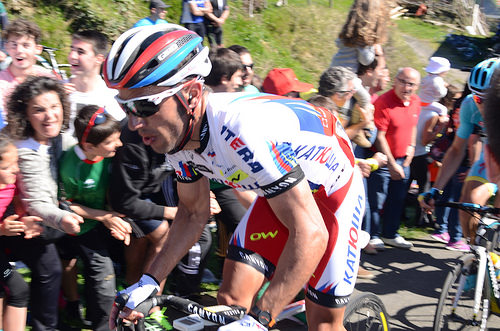 If the long mountain passes later in the race will test climbing efficiency and the sustainable uphill speeds of the top riders, the Mur de Huy asks a rather simpler question. ‘How quickly can you cycle uphill?’ it says. ‘Go on. Give it everything. Let’s see how fast you can go.’

Chris Froome did indeed give it everything. At the 20 per cent corner, he made an effort to shed his rivals. Could anyone match the top speed of Froome? Gallopin’ Tony could – briefly – and so could Joaquim Rodriguez. Then, a few yards further on, Rodriguez calmly rode off.

In my preview of the yellow jersey contenders prior to the race, I said that no-one could sprint quicker uphill than Joaquim Rodriguez. If his departure off the front might have been even more breathtaking two or three years ago, it was still an extraordinary feat when breath taking was at its maximum. Even at 36, no-one can scale a wall masquerading as a road quite like him.

Has Chris Froome got jaundice?

No, it’s just the light reflecting off his yellow jersey. The rest of him? No, that’s normal – he always looks that sickly.

Froome takes the lead because he came second and because Fabian Cancellara was caught out in crosswinds while suffering the after-effects of a quite horrendous crash which involved a large proportion of the peloton. Bikes flying through the air make for quite the spectacle, but the thought of wheels, chain rings and tarmac coming up against the soft flesh of fallen riders vastly outweighs it. It won’t be the last crash, but hopefully it was the worst.

I sometimes wonder whether it would be worth kicking the Tour off with a mountain stage – nothing too selective, just something to blunt the riders early. Perhaps it would somewhat neuter the frenetic battle for position at the front of the race on subsequent days.

Update: Cancellara is out of the race with fractured vertebrae – no wonder he struggled to stay in the front group.

Another update: A few of the overall contenders lost significant time to Froome. Those losing over a minute include Thibaut Pinot (1m33s) and Laurens Ten Dam (13m38s).

Almost as if we’re backpedalling through the spring, we depart the Ardennes and arrive on the cobbles. Dirty, tense, and hugely unpredictable, last year’s cobbled stage was a day to remember, crowned by one of the great performances by a Tour de France champion. It’s no exaggeration to say that some of the overall contenders are shitting themselves about this stage. Like every stage in this first week, it’s well worth watching.