Dig out your giant inhaler, clamber into your mankini and brace yourself for the first week of the Tour de France 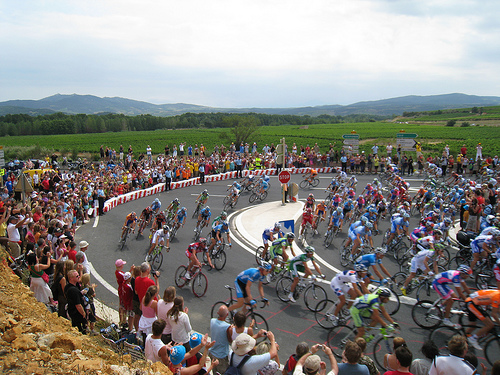 Warm your croissants, break out the cheese, crack open a bottle of Corbieres and ask yourself what the hell kind of meal is this? The answer is: it’s not a meal; it’s the first week of the Tour de France. All that’s happening is that I’m randomly listing stereotypical French things in a forlorn bid to create the appropriate ambience.

So what happens now? Over the years, I’ve generally covered every stage on this site. There are pros and cons to this approach.

This year I don’t think I’m going to do daily updates. I think the long weekly round-up pieces I’ve been doing for the Giro d’Italia and Vuelta a Espana tell the story of a race more clearly. It would also be completely impossible for me to find the time to cover every stage in even a half-arsed manner, so that’s the real reason.

But this is also a bit unsatisfactory; a bit too far to the opposite extreme. I propose that I use weekly round-ups as the tentpoles of my coverage and I’ll maybe drape the odd bit of canvas between them if something quirky catches my eye.

What you will not be getting are individual stage reports (and in all honesty, the midweek filler bits might not happen either and at least one of the round-ups will definitely arrive late, because it always does. This isn’t the BBC, you know).

What does the first week bring?

So without further ado, let’s quickly take a look at the week ahead, because we’re dealing in full weeks now.

It is by and large a green week, by which I mean it is dominated by sprint stages. Of these first nine days of racing, five are likely to result in bunch sprints. Those will be days for Peter Sagan, Marcel Kittel, Mark Cavendish and them.

Stage 3 (Monday) is a 35km team time trial. This will be visually boring, but will shape the race. Good riders in weak teams will suffer. Big budget teams will prosper.

Stage 5 (Wednesday) is all small roads and little hills. There are no mountains, but it is deceptively non-flat and could end up being very exciting.

Stage 6 (Thursday) is kind of like a Vuelta stage. Nothing much happens until the end, at which point they go up a steep hill twice and everyone’s lungs burst.

Stage 9 (Sunday) is a must-watch. Highlights are great, but I’d actually be tempted to watch this one live (except that the weather will still be wonderful then, so absolutely don’t – go out on your bike and watch the highlights). The stage makes use of 15 stretches of cobbles from Paris-Roubaix. They did this a few years ago and it got messy. This year’s cobbly route is actually way more cobbly and therefore much more threatening.

So that’s it for now?

Yup. I’ll catch up with you all on Monday (ish) unless one of those wedger pieces happens.

In the meantime, please do encourage other people to subscribe for the email updates. You could maybe talk up my professionalism and refer to my bold promises about maybe doing updates once a week or thereabouts.