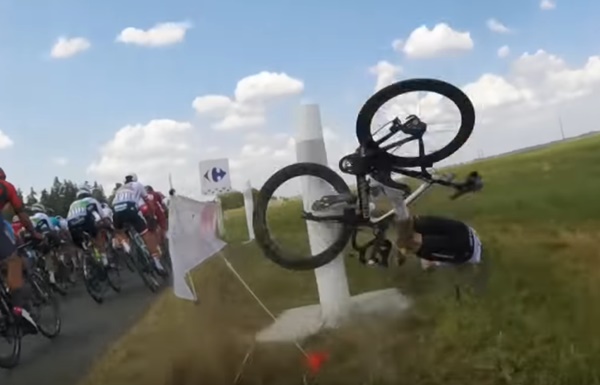 Week one is best divided into the green story and the yellow story. Let’s deal with the green story first (because that’s the order I arbitrarily put them into in that previous sentence).

The green story (the points classification)

The bare facts are these.

Gaviria started the week well, Groenewegen finished it well and Sagan was everywhere all of the time because he’s Peter Sagan. Thanks to his ability to take points on almost every stage, he’s of course in the green jersey, as predicted.

Last year’s winner of this competition, Michael Matthews, abandoned before stage five because he was ‘more ill than just vomiting’. Team Sunweb physician Mannes Naeff said: “Unfortunately Michael got sick this morning, he has been vomiting and as the morning progressed he has become more ill.”

The press release also mentioned that the team had been unable to get ‘nutrition’ into Matthews at breakfast. You can just say ‘food’, lads.

For his part, Mark Cavendish’s most high profile moment came when he cautiously descended into a ditch to retrieve his race radio. 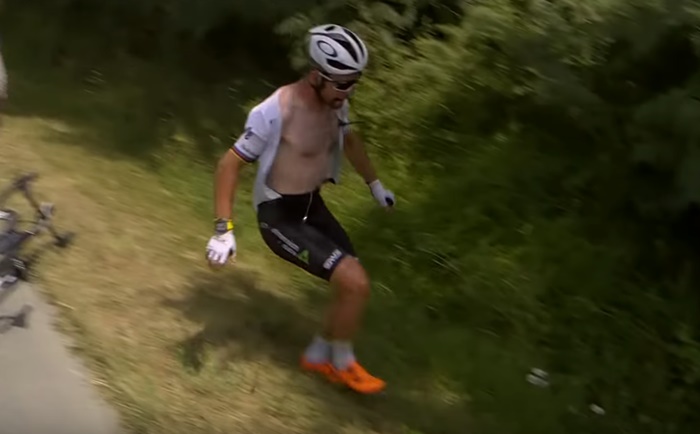 The yellow story (the general classification)

Time lost because of crashes is one of the most important aspects of the Tour de France in terms of deciding who actually wins the thing. It happens a lot during the first week for two main reasons. (1) Everyone’s keen and fresh. (2) There are a lot of flat stages where the pace really climbs as the peloton nears the finish.

Crash with 5km to go on a flat stage and it’s all but impossible to catch up again because everyone else is already going flat-out. This happened a whole bunch of times to a whole bunch of people, but it’s something that doesn’t get a huge amount of coverage because the story is always the same: “X crashed and lost Y seconds.”

Nevertheless, if you want to understand how the race is won and lost, you have to pay attention to this stuff. Rather than devote a bunch of paragraphs to every time this happened to someone significant, let’s just break it down to the bare essentials. Let’s list the main contenders who suffered a crash or a puncture or a mechanical and what time they lost.

I think everyone else from my preview list was unaffected.

So where else was time won and lost?

With the work shared between your various riders, team time trials are bad news for the cheapo teams who can’t pad out their line-ups with former world champions and Monument winners.

Vincenzo Nibali lost about a minute to rivals in stronger teams. Romain Bardet was a little further back, as was Primoz Roglic, my outside tip to do well this year.

Rather more surprisingly, Movistar lost getting on for a minute even though almost half their line-up is made up of team leaders (Valverde, Quintana and Landa).

It was a better day for Richie Porte, who was in the winning team, and for Chris Froome and Geraint Thomas, who were just four seconds slower. Adam Yates and Tom Dumoulin were also in similar territory.

The worst affected of the main contenders was Dan Martin who lost about a minute thirty. His team is a bit shit.

Despite tough, winding, up-and-down roads, stage five delivered precisely nothing of import as far as the general classification was concerned, so it was left to the double-ascent of the Mur de Bretagne on stage six to bring us some proper yellow racing. 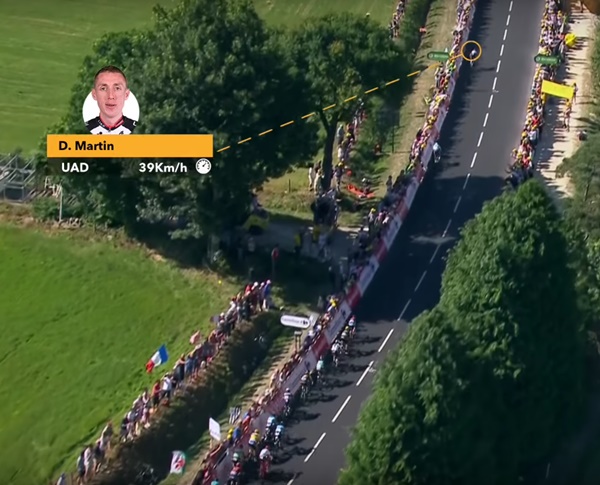 He was faster than most people by three seconds. A few of the guys – including Chris Froome and Rigoberto Uran – lost closer to 10 seconds, but you can probably put that down to the specific demands of a short, sharp climb rather than poor form.

So, the cobbles then… 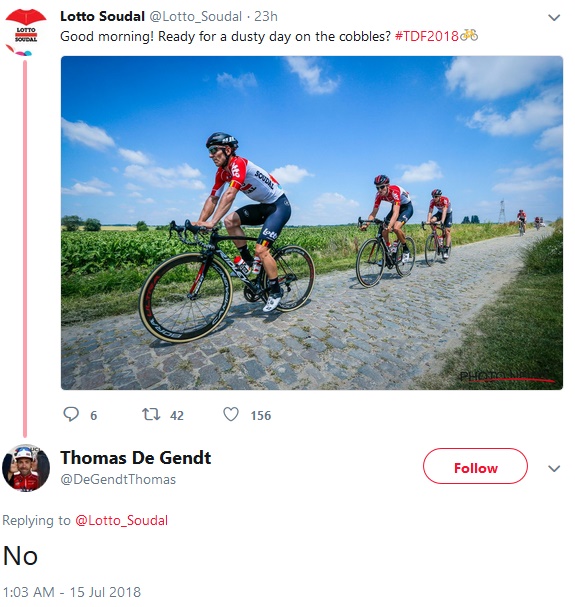 Belgium provided half of the top ten on a chaotic stage to Roubaix, but not the man who finished first. That was 2015 Paris-Roubaix winner and the peloton’s foremost dry stone wall aficionado, John Degenkolb.

The German has had little success since a 73-year-old English woman, driving on the wrong side of the road, ploughed into him and five team-mates without braking in Alicante in 2016. He was therefore quite emotional about this. (As a quick aside, anyone who doesn’t like Mark Cavendish should see how genuinely thrilled he was for Degenkolb after the finish.)

As for the overall contenders, it somehow ended up a lot less meaningful than everyone had been assuming for every second of the entire day. Crashes and punctures billowed through the stage like a dust storm. It seemed like everyone fell at some point or other. Chris Froome had a particularly impressive spill after riding over his team-mate Gianni Moscon. (Bodies and bikes were among the most significant obstacles.) 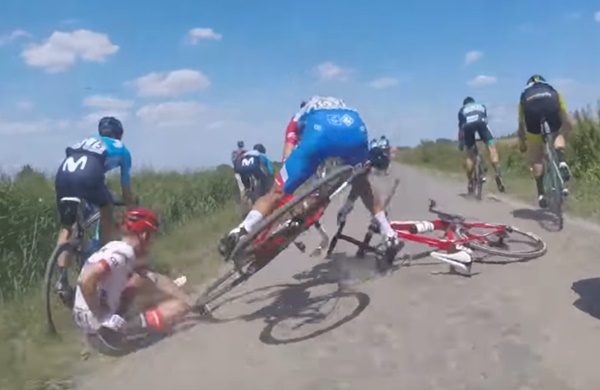 Afterwards, most of the general classification contenders seemed in some way or other shell shocked.

The most significant fall was Richie Porte, who didn’t even make it out of suburbia and onto the cobbles. He fractured his collarbone and abandoned the race. For some reason three week racing just doesn’t agree with Porte.

The next worst affected was Romain Bardet who had more punctures than I can count and changed his bike about three times after each of them. The great mystery is how he spent almost the whole day chasing the front group and yet somehow avoided losing any time.

That mystery can be partly resolved by the sports director of Adam Yates’s Mitchelton-Scott team, Matt White, who pointed out that the TV motorbikes were… prominent.

At one point with just 3km to go, a group with Bardet in was about 1m30s behind his rivals, while a separate group with Rigoberto Uran in was 1m50s behind. By the finish, Bardet had caught up, while Uran lost, erm, 1m50s.

Like I always say, it’s easier to ride behind someone else (particularly if that someone else is on a motorbike).

Other than Porte, Uran was the only real loser on the day (although Bardet must be more tired than most). The happiest of the overall contenders was Bob Jungels, who finished in the second group of the day and gained eight seconds on most people.

So who’s in the yellow jersey?

If the Tour de France were three weeks of this, Greg Van Avermaet would be delighted. Hills, fast flat days, cobbles – he’s in his element. Shame almost the whole of the rest of the race is in the mountains. 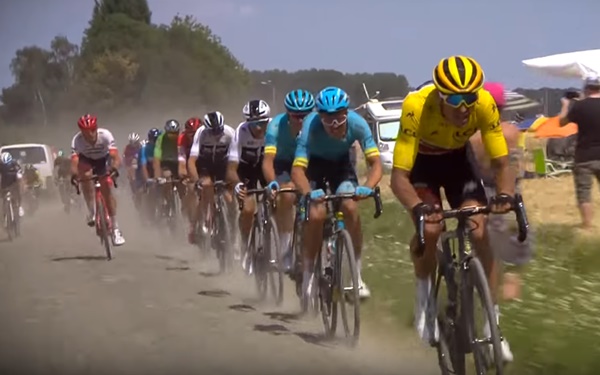 Greg Van Avermaet having a whale of a time (via YouTube)

Greg’s actually got a pretty sizeable 43s advantage over the man in second place.

That man is Geraint Thomas, but with those mountain ghosts haunting the Belgian, he’s our best-placed rider, so all time gaps should really be measured to him.

Week two instantly hits the mountains (and pretty much stays there). This means we’ll finally get the Grand Mountain Sort-Out and some sort of clarity when we look at the general classification. (And I won’t have to repeat the exercise immediately above, which let me tell you I am hugely delighted about.)

The top ten may currently be full of charlatans (Tim Burgess is fifth) but they’ll all sink out of view come the first long climb.

Stage 10 (Tuesday) brings three first category climbs and also the first HC (‘beyond categorisation’) climb of the race. The Plateau de Glières is a highly nasty 6km at 11.2% and made worse by a gravel section near the top. It’s early in the stage, but there are two tough climbs in a row before the descent to the finish, so we should get time gaps.

Stage 11 (Wednesday) will be a quick 108km, but it somehow squeezes in two HC climbs ahead of our first proper summit finish.

Stage 12 (Thursday) is kind of like a super-sized version of stage 11. The profile looks almost identical, but it’s 175km, the climbs are twice as long and the summit finish is up Alpe d’Huez.

Stage 13 (Friday) is mostly flat but with some bobbly bits towards the end.

Stage 14 (Saturday) is mid-mountains with a steep uphill finish and should bring further time gaps.

Stage 15 (Sunday) has a couple of proper climbs with a descent and then some flat to the finish. It doesn’t look much on paper, but at the end of a hard week it’s hard to predict how this one’ll pan out.

Meet you back here at some point next week

I’ll be back with another overlong rambling overview of what’s happened at some point after all this has taken place. Hope you’re coping okay with this new weekly schedule. Please sign up for the email if you haven’t already done so. It ensures you won’t miss anything.