Who will win the green jersey? A handful of points competition contenders for the 2018 Tour de France 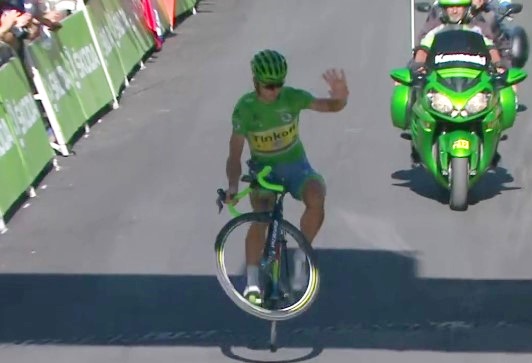 Peter Sagan failed to win the points competition (here’s what that is) at last year’s Tour de France because he got chucked off the race. The five years before that, he won it every time. It’s quite a challenge to find anyone predicting that someone else will win it ahead of him in 2018.

Here are some other names to prevent this from being a one paragraph article.

Michael Matthews (who I always somewhat unfairly think of as Sagan-lite) won this competition last year, so he’s the obvious second choice.

Sagan and Matthews can cope with the hills and maybe even the odd mountain, but there are quite a few classic flat stages this year. Marcel Kittel is probably the pick of the out-and-out sprinters – if only because Mark Cavendish has been having a dogshit season in which he’s frequently crashed out (on one occasion hitting a concrete bollard).

Andre Greipel will probably get a stage, maybe two, but not much more than that.

A third German, John Degenkolb, gets a mention because he used to have an excellent moustache and is fascinated by dry stone walls. However, he’s never really returned to top form since a 73-year-old English woman, driving on the wrong side of the road, ploughed into him and five team-mates without braking in Alicante in 2016.

Edvald Boasson Hagen might gather points on the sly; Alexander Kristoff has done well in this competition before; Dylan Groenewegen is up-and-coming and so is Fernando Gaviria.

In summary: It’s Sagan. All the way.