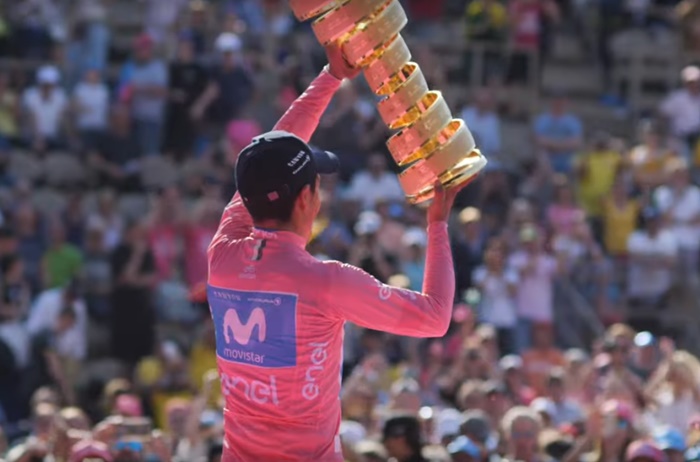 ITV4 will not be covering this year’s Giro d’Italia. The race is run by a different organisation from the Tour de France and many other major races and they don’t have the rights. That isn’t to say you can’t see it though. You still have options.

Eurosport do a great job of covering professional road racing. A lot of people have Eurosport as part of their TV package, but if you don’t, you can sign up for the Eurosport Player. It’s £6.99 a month – which will cover the entire race – or £39.99 for a whole year (for which you would get live coverage of pretty much all the other major bike races this season and for most of next season). The Eurosport Player means you can follow the entire race on your phone, your laptop or via a TV app (or even on your telly plugged into your laptop as a workaround).

The race is also again being broadcast live on S4C and S4CHD live, which is available free in the UK. Here’s where you can find it. It’ll be Welsh commentary, but there may be an option to toggle to English. (They offer that option with rugby.)

A daily one-hour highlights programme will be broadcast on free-to-air channel Quest at 7pm. It’s a Eurosport production and they’ve been making more and more effort with it each year. Somewhat bizarrely, triple jump world record holder Jonathan Edwards hosts the programme and Bradley Wiggins has been doing the punditry in recent years. While it lacks the dry humour of ITV4’s show, it’s intelligent and organised and tells the major stories well. Quest is available on Freeview and most of the other UK TV platforms, so there’s a good chance that you’ll be able to get it.

If you go down the Eurosport Player option, full stages and highlights will be available on-demand.

I’ll be covering the Giro, so why not follow it here? If you haven’t done so already, here’s why you should sign up for email updates and if you do already subscribe, please forward today’s email to someone who might be interested by way of recommendation. This act of kindness would be greatly appreciated and I’ll reward you by just sort of carrying on much as I would have done even if you hadn’t bothered.

This is an updated version of last year’s article about UK TV coverage of the Giro d’Italia.