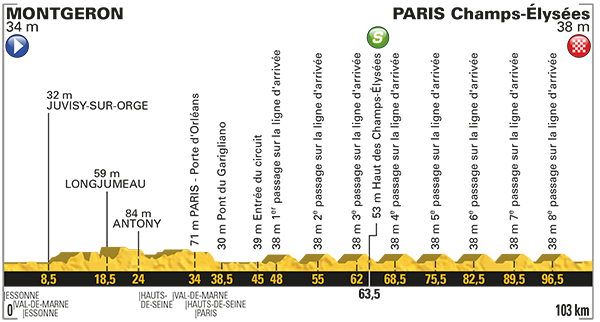 I didn’t see this. I was out cycling.

Based on the overhead, Groenwegen started sprinting early and held on. André Greipel came from further back and while he finished strongly, he ultimately ran out of road. Not many competitors wish the Tour de France was longer, but Greipel would happily have done another 50m or so, you’d have thought.

Greipel has always had a reputation for snaffling at least one stage in every Grand Tour, so this is a bit sad. Maybe things are winding down for the man they call The Gorilla.

In contrast, Dylan Groenewegen is at the start of his career. He’s making a name for himself. That name, according to ITV4’s David Millar, is Dylan Van Groenwegen.

It does seem odd that a Dutch rider wouldn’t have a Van in his name. Maybe it’ll stick. After all, Pierre-Roger Latour has ended up retaining the second part of his first name even though it only appeared as a result of a clerical error in one of his early races.

I’ll probably do a final week wrap at some point this week (but probably not tomorrow because I quite like the idea of finally having a day where I’m not publishing something).

After that, it’s the Vuelta a Espana from August 19. I think, for the reason given above, I’m going to go with weekly reports for that one, so don’t feel that you need to unsubscribe from the email in anticipation of an unwanted barrage of updates.