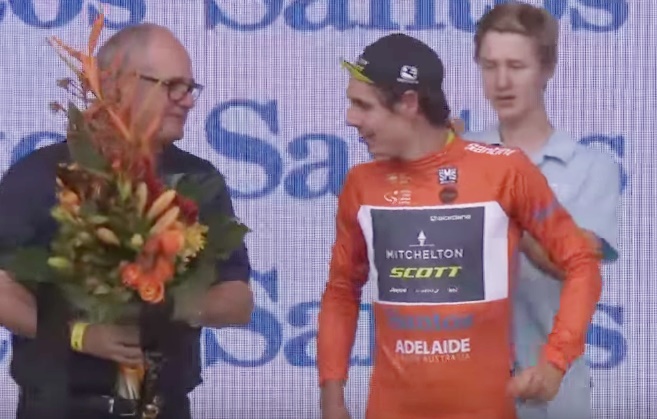 There’s been an awful lot of high profile off season controversy this year and you’ve probably been wondering what nugget of news would finally trigger another update on this site after an unusually prolonged silence.

I managed to ride out all the stuff about the mysterious contents of the Jiffy bag delivered to Bradley Wiggins at the 2011 Critérium du Dauphiné and the resultant UK Anti-Doping investigation that was ultimately abandoned because those mysterious contents remained mysterious. The case is best left unsolved, they said. Or something.

I also managed to resist putting fingers to keyboard for the subsequent news about Chris Froome’s excessive inhaler puffery at last year’s Vuelta a Espana. That’s been a big one for people who like getting into arguments on social media.

I feel like I’ve done well, but some news is bigger that that. Sometimes news is so big it simply can’t be ignored.

The winner of the Wilson Parking Winning Team Award at the recently-completed Tour Down Under was Bahrain Merida.

There you go. Never let it be said that I don’t cover the important stuff.

It’s worth pointing out that while the Winning Team Award was the only competition worthy of sponsorship by Wilson Parking, there was of course a less auspicious individual victory to fight for as well.

The first event of the 2018 WorldTour (still no space) was won by South African rider Daryl Impey. He managed a couple of second places on sprint finishes, but the key moment was another second, when he finished behind Richie Porte on Willunga Hill.

In a masterpiece of broadcasting, the crucial gap between Porte and Impey on that stage wasn’t shown with TV coverage cutting away to the peloton when Porte crossed the line. The two riders eventually finished the race on the same time, so those eight seconds were kind of key.

I can’t really be bothered pondering Impey’s strengths as a rider and trying to work out whether he might win something more high profile later in the year.

You wouldn’t normally expect him to. Let’s just leave it at that.

Apparently the Cadel Evans Great Ocean Road Race is part of the WorldTour this year, but I think you’d struggle to convince people that race has the same status as Omloop Het Nieuwsblad at the end of February. That’s probably the next thing I’ll be paying attention to.