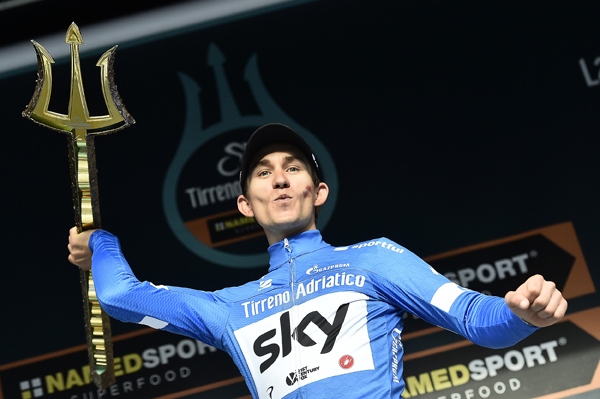 Considering the ongoing furore about his allegedly excessive, possibly ban-earning use of his inhaler and the much larger controversies blighting Team Sky, Chris Froome took the wise decision to be woefully out of form at Tirreno Adriatico, finishing 34th.

The story of Spring Stage Race Week was however the other, oft-overlooked factor influencing Team Sky’s dominance, which is its monumental budget and the team’s somewhat irritating habit of hoovering up all the best riders to put to work as mere helpers.

With Froome blobbing around like a man short on sleep, Geraint Thomas quickly became Sky’s de facto leader in Italy. Thomas being Thomas, he inevitably suffered a mechanical at a crucial moment that pretty much did for his chances of victory.

No matter though, because Team Sky’s third choice rider was Michal Kwiatkowski, a former world champion with any number of major one-day wins to his name. He won the race overall and Thomas was third with non-Sky rider Damiano Caruso sandwiched between them.

Caruso was, apparently, 11th in last year’s Tour de France. I’ve high hopes that he’ll achieve something similar this year: finishing in a lofty general classification position without me at any point noticing that he’s even taking part in the race.

Kwiatkowski’s win is of course also a meaningful result ahead of the one-day classics. He could, in theory, win pretty much any of them.

In some of the less hilly ones, he’ll be up against his old sparring partner, Peter Sagan, who once again embraced bridesmaidery, finishing second on no fewer than three of Tirreno-Adriatico’s seven stages.

Sagan also finished second to Kwiatkowski at last year’s Milan-San Remo and still has much to say about the result.

“If you analyse how Kwiato won last year, then… If I win like that, I wouldn’t be happy with my performance,” said the Slovak.

“Sometimes you don’t win the races by being strongest, but you need to be the smartest.”

Before we move to France, a quick nod too for Tiesj Benoot, who followed up his Strade Bianche win with fourth overall. He too should feature prominently in at least one of the classics.

A promising stage racer, Marc Soler was nevertheless best-known for failing to follow Alberto Contador on Stage 20 of last year’s Vuelta before this race. As such, his attack with 50km to go on the final stage was met with a collective “aw, let him,” from his rivals, who almost certainly won’t ever repeat the mistake.

Soler finished third on the day, gaining 30-odd seconds on Simon Yates – who had won the previous stage – and this was enough for the Spaniard to pip the Briton to the overall by all of four seconds.