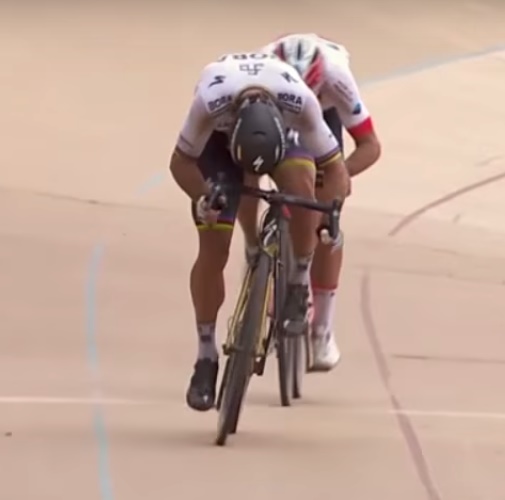 Peter Sagan sprints at Paris-Roubaix (all images via Eurosport)

Peter Sagan is the central figure in pretty much every race he rides, so let’s just write about Peter Sagan today.

Sagan has appeared in two one-day classics in the last fortnight – Paris-Roubaix (which is also a Monument, so technically a bit bigger than your standard classic) and Amstel Gold (which is named after a beer). He sprinted at the end of both of them, so let’s ask which version of Peter Sagan did the better sprint?

At Paris-Roubaix, Peter Sagan attacked with about 50km to go. With the possible exception of Niki Terpstra, who left it too late to put in a meaningful effort to catch him, he was by some margin the strongest rider in the race and he stayed out front until the end.

He was however accompanied by Silvan Dillier, who had been ahead of him when he attacked and who actually managed to stay with him even as he kept a whole group of top quality riders behind at bay. This meant that when they got to the velodrome, there was going to be a sprint.

How good was Sagan’s sprint? Well he beat the only guy he was up against and he won the race, so pretty good. I think even if 200-and-however-many kilometres (many over cobbles) meant that it wasn’t the most powerful sprint, that’s to be expected and also, surely the whole point of sprinting is to be first to the line. In that, he was successful.

At Amstel Gold, Sagan was again among the favourites at the business end of the race. Michael Valgren – who you will know as ‘that bloke with the quite ferociously blond hair‘ – attacked a couple of times and the second time stayed away from everyone bar Roman Kreuziger, who he ultimately beat in a sprint finish.

Sagan chased the first time, but played it cool when Valgren attacked the second time.

At this point, Sagan was in the same group as Alejandro Valverde and Julian Alaphilippe, who are probably the two riders most likely to win races in the week immediately after Paris-Roubaix. Presumably Sagan thought they should do the chasing, but they thought that he should, and then no-one did. Then they slightly did, but it was too late.

As they neared the line, Sagan outsprinted Valverde and Alaphilippe and also Tim Wellens.

How good was Sagan’s sprint? Well, he beat more people and the people he beat were stronger riders than Silvan Dillier, so on that basis it was a better sprint. However, as I said before, sprinting is really all about being the very first to the line and by this measure, he failed. Sagan’s Amstel Gold sprint was only good enough for fourth because three people had already finished (Enrico Gasparotto – who, honest to God, only races with any real seriousness for this one week in the entire season – went after Valgren and Kreuziger somewhat belatedly and finished third).

Paris-Roubaix Peter Sagan did the better sprint because it won him a very important bike race.