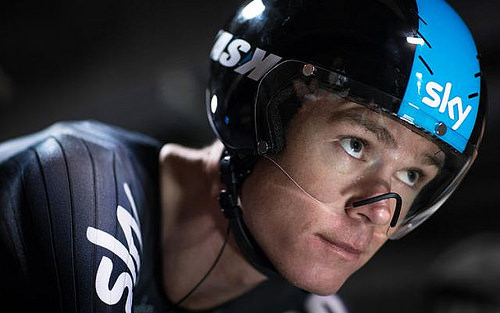 Now that’s all completely resolved, let’s quickly whizz through some of the more obvious contenders, including the man himself.

Gangly Chris has won a bunch of Tours de France and last year followed that up by winning the Vuelta a Espana as well. A Giro victory would be three Grand Tours on the bounce. He is however facing a possible ban for excessive inhaler use during that Vuelta win. The fact he is racing in these circumstances is kind of shit for everyone involved, but it’s also very cycling.

The simpleton’s narrative for this year’s Giro is that “the time trialists” Froome and Dumoulin are pitted against a bunch of “climbers” and the former will gain time in solo rides against the clock while the latter will claw it back in the mountains. As a simpleton myself, I am all in favour of this sort of thing, but the truth is that Froome and Dumoulin are also excellent climbers and might not cede any time at all when going uphill. Dumoulin is the defending champion, after all.

Slightly mad-looking Italian lad. Flaps his bike about like hell when he attacks on a climb. Often looks like he’s about to cry. Doesn’t generally cry. Not good in a time trial.

No-one could match Lopez in the mountains towards the end of last year’s Vuelta. He’s one of a particular brand of riders who seem to pour out of Colombia: they climb really well and you always suspect they’re about to climb slightly better still. It never actually happens, but there always seems to be this dim threat of even more to come.

The Frenchman came fourth last year, but it felt like he came third because Thibaut Pinot just fundamentally seems like the kind of rider who comes third. That said, he did beat the majority of these guys in the Tour of the Alps recently.

A small man with a smile so wide you sometimes worry that the top of his head might slide off. Climbs well, time trials badly.

Amid all the kerfuffle about Froome’s salbutamol case, it’s odd to think that another British rider actually served a four-month ban for “non-intentional doping” after a team doctor failed to apply for a therapeutic use exemption for an asthma inhaler. Yates’s case is done and dusted and largely forgotten about, but the lawyers are heavily into Froome’s case, which is partly why that one’s dragging on.

The diminutive and longstanding hero of this website. Pozzovivo has actually become fractionally less bad at all the very many things he’s bad at in the last couple of years. However, these improvements seem to have coincided with a slight deterioration in the one thing he’s actually good at (climbing), meaning he’s pretty much exactly where he was all along (about fifth or sixth).

The South African will consistently finish in the front group and be quite high up on the general classification without ever really being what you would call ‘visible’.

Woods was a really rather good middle-distance runner until he was about 20, at which point his foot told him that he had to stop. So he started cycling and got really good at it and (perhaps due to the late start) still seems to be getting better at it, even though he’s now 31. He finished 38th last year, in what was his first Grand Tour. Later in the year, he raced his second in Spain and finished seventh.

On paper, Rohan Dennis is a Froome/Dumoulin type of Grand Tour contender. In practice, he’s failed to finish four of the six three-week races he’s started and finished 84th and 101st in the other two. He always seems to be learning the ropes. You wonder just how many ropes he needs to learn.

The race begins on Friday with a 9.7km time trial. Nothing odd about that, although it will take place in Jerusalem.

That is an actual fact and not just random bullshit I’m throwing at you for a laugh. The first three stages of this year’s Giro d’Italia take place in Israel.